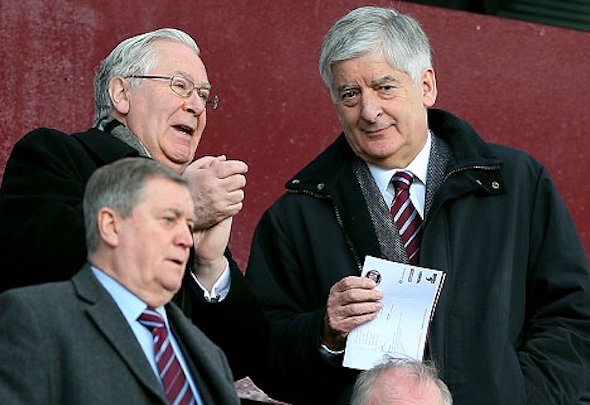 David Bernstein and Mervyn King presented Aston Villa chairman Steve Hollis with a shortlist of managerial candidates before quitting the board, according to a report.

Bernstein and King wrote to Hollis on Monday, tendering their resignations with immediate effect after both claimed their positions were untenable.

The exits of the pair just 34 days after they joined a newly-formed board has raised deep concerns over the club’s short-term future following relegation from the Premier League.

According to the BBC, Bernstein and King handed Hollis a shortlist of candidates to succeed Remi Garde, who was sacked as manager on 29 March.

The list is said to have consisted of four names, as well as two back-up options.

Bernstein, the former Football Association chairman, was heavily involved in finding a new manager but grew increasingly frustrated by the delays in the process.

The BBC does not name the six men under consideration, with the likes of David Moyes, Nigel Pearson, Sean Dyche and Mick McCarthy among those who have been strongly linked to the vacant post in recent weeks.

Villa have said in a statement that the managerial search “remains a priority”, while Hollis is “currently engaged in extensive negotiations in relation to the sale of the club”.