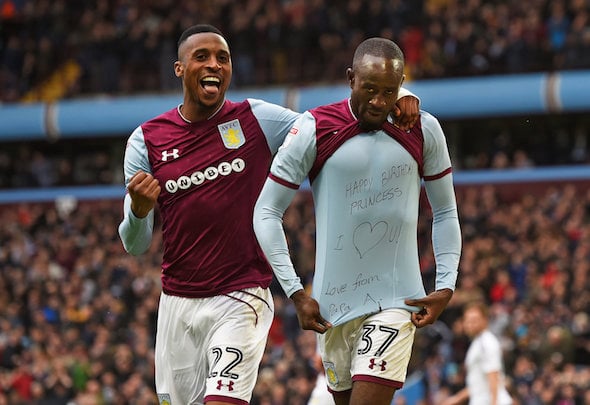 Aston Villa manager has praised the club’s forward Albert Adomah following his performance in the victory over Fulham on Saturday.

The 29-year-old scored the winning goal as Villa beat their Championship rivals 2-1 at Villa Park.

Summer signing John Terry opened the scoring with his first ever goal for the club before the visitors equalised just before half-time with a strike from Stefan Johansen.

However, Adomah was on hand to notch up his first goal in three league matches to seal the win for Bruce’s side and guide them into the playoff places.

Speaking to the Birmingham Mail after the match, Bruce was full of praise for the forward and claimed that it was the best performance he has witnessed from Adomah.

“That’s the best I’ve seen him play since he’s been at the club,” he said.

“He was a threat all day, he ran a million miles and scored the winner. I’m delighted for him.

“He knuckled down, trained every day as if it was his last and he now looks as though he’s got a real spring in his step.

“He’s playing on the left coming in onto his right foot, he seems to enjoy it, and he’s now got a few goals which is great.”

The result means that Villa are now unbeaten in nine home league home matches and they are currently five points off the automatic promotion places.

Adomah has impressed with his displays this season, scoring five goals and providing two assists in all competitions.

The Ghana international has slowly started to become an important part of the Vila first-team after Bruce left him on the bench during the early stages of the season.

Adomah will be hopeful to produce the goods once more in next weekend’s derby against Birmingham City.

In other Aston Villa news, the club has confirmed that another attacker has penned a fresh new deal.