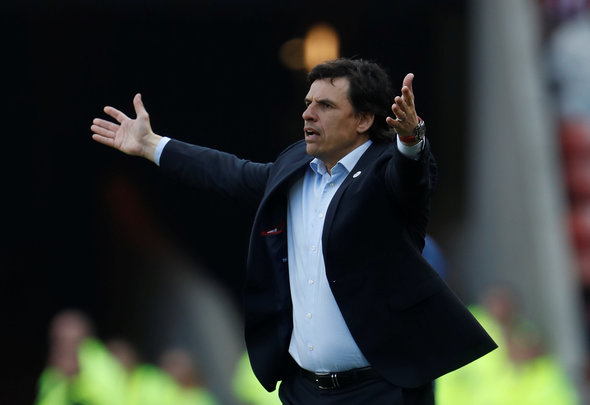 Rangers fans have taken to Twitter to urge the club to reconsider their reported offer to Steven Gerrard and instead look to hire Chris Coleman as the club’s next manager.

Coleman, 47, was sacked by Sunderland on Sunday, a week after the Black Cats were relegated from the Championship.

Sunderland chairman Ellis Short had confirmed that the former Wales manager had been released from his contract just over five months after he was hired while a deal was also agreed to sell the crisis-hit Wearside club.

It has been widely reported in the past week that Rangers are attempting to hire Gerrard, 37, as Graeme Murty’s successor when the season ends.

ESPN has claimed that a four-year deal is on the table for the Liverpool legend, who is currently coaching the Under-18s on Merseyside.

The idea of hiring Gerrard has attracted mixed reactions from Rangers fans with many concerned by his lack of managerial experience, while others are excited by the prospect of what a big name could do in Govan.

However it now seems that the Gers faithful want Dave King and Mark Allen to scrap their advances for the Liverpool legend and instead go after Coleman, with one saying that he would be a “great shout”.

If Gerrard deal ain't been signed yet get on phone to Chris Coleman https://t.co/VQSCJ8frpZ

I hope the Gerrard deal is not done, I really want Chris Coleman to take charge

Forget Gerrard , Chris Coleman is the man we need, Goget him NOW

Coleman has previously managed in the Premier League with Fulham and has also had spells at Real Sociedad, Coventry and AEL.