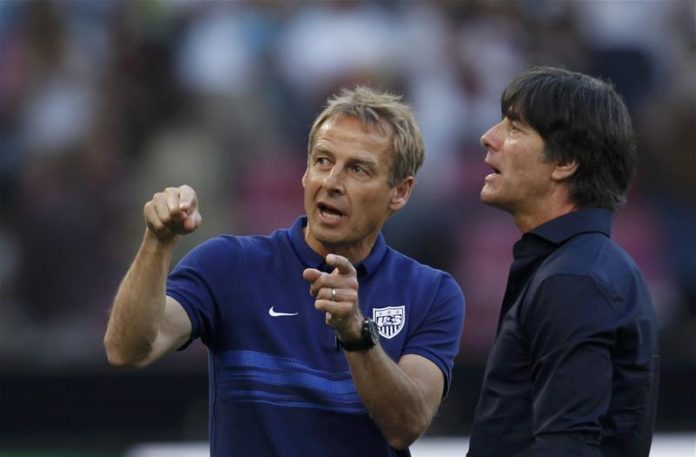 Former Tottenham striker Jurgen Klinsmann could be set for a return to English football after he was installed as the favourite to be the next Southampton manager.

Klinsmann, 51, has managed the United States international team since 2011 and has never coached in the Premier League.

But bookmaker Skybet slashed the odds on him returning to English football from 40/1 to 2/5 on Thursday afternoon.

The firm rank Klinsmann as the favourite to replace Ronald Koeman ahead of Manuel Pellegrini, Claude Puel and Frank de Boer.

Klinsmann is hugely popular among Spurs fans after scoring 30 goals in just 50 appearances back in his first spell at White Hart Lane in 1994/95.

The German international then returned for a swansong end to a glittering career in 1997 and scored a further nine goals, finishing with a complete total of 277 goals in 614 matches.

The former Bayern Munich boss was widely praised for guiding the USA to the last 16 of the 2014 World Cup before seeing his side lose narrowly to Belgium in extra time.

Were Klinsmann to get the job it would likely mean the end of his five-year association with the US national team.

In other Tottenham news, Former Tottenham director of football Damien Comolli has revealed that he rejected the chance to sign Dimitri Payet when he was a youngster