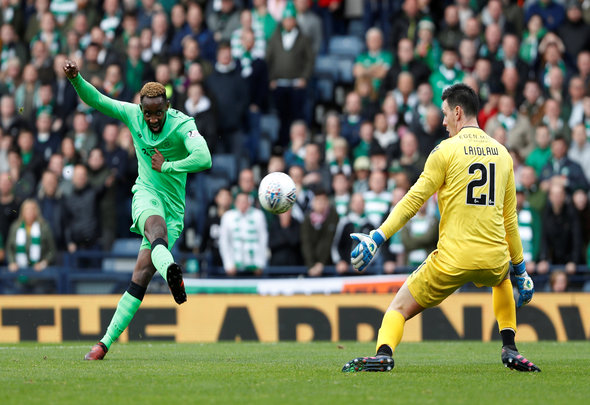 Celtic manager Brendan Rodgers has confirmed the club have received one official bid for star striker Moussa Dembele but they have no intention to sell with the player happy with his situation.
The French youngster has reportedly been attracting the attention of a host of top European sides over the last year, with his 40 goals in 70 appearances across all competitions for the Hoops resulting in several glances being cast his way.
The 21-year-old, who arrived at Celtic Park from Fulham on a free transfer back in 2016, has struggled to demonstrate his finest form this season, with just eight goals in 21 appearances, as a hamstring injury kept him out of the club’s opening fixtures, but that has not stopped one club from making a move to secure his signature.
Rodgers confirmed that the Hoops had rejected the bid, which is said to be well below the reigning Scottish champions’ valuation, and that the club were not willing to let him go, revealing the player himself has never demonstrated a desire to leave.
He told Sky Sports’ website: “Moussa has never once asked to leave Celtic. He is not a player for sale.
“He has come in with a plan: his agent, himself and I know what the plan was but he has never asked once to leave. He is fully committed to Celtic.
“We have had one official bid for him that is nowhere near the value of what the value of Moussa is. But equal to that we have no interest in selling him.”
Dembele was instrumental in the club’s treble winning season during the 2016/17 campaign, his first in Glasgow, netting 32 goals as the club won the Premiership title, the Scottish League Cup and the Scottish Cup.
In other Celtic news, how this Parkhead sensation responds to battle will depend on how far he goes with the Hoops.