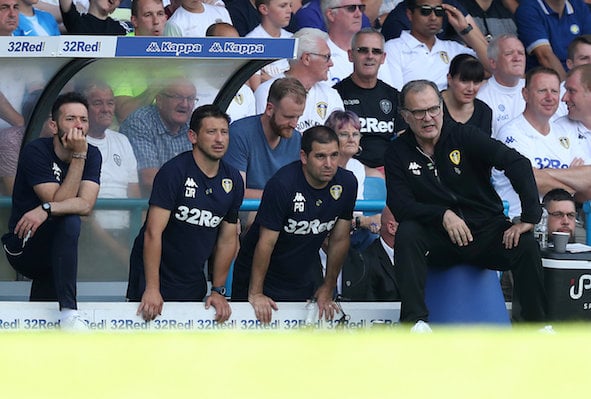 Noel Whelan has claimed Marcelo Bielsa will be “desperate” to keep Leeds United coach Carlos Corberan on his staff for next season.

The Yorkshire Evening Post claim the Spaniard, 36, is the subject of an approach from Spanish third division side Cultural Leonesa, who want to appoint him as their new manager.

Corberan joined Leeds as Under-23s boss in the summer of 2017 and was promoted to Bielsa’s backroom staff last season as he occupied a dual role while continuing to manage the youth team.

Speaking exclusively to Football Insider, Whelan explained how the Championship big hitters will not want to lose such a key member of their coaching set-up.

“Carlos Corberan has made a big impact at Leeds and is tipped to eventually become the first-team manager,” the ex-striker said. “He has had two very successful seasons with the Under-23s and a number of those players have established themselves in the first team.

“He is also on the senior coaching staff and he wouldn’t be there unless Bielsa rated him highly. Bielsa will be desperate to keep him, absolutely.

“The two of them work closely together and the manager will want to build on that next season. You have to keep that continuity with the manager and his backroom staff. Corberan is also vital in helping pave the way for the best youngsters to progress into the first team.

“The first team playing style is mirrored in the Under-23s and Corberan is key to that. It makes it easier to develop players for the first team and the results of his work have been quite incredible.

“This will ruin Bielsa’s holiday if he leaves.”

Cultural Leonesa are controlled by Qatar’s Aspire Academy, the development centre with which Leeds established an official partnership with in 2018.

The club loaned out two of their players, Ouasim Bouy and Yosuke Ideguchi, to the Spanish outfit in the 2017-18 campaign although neither of them played very often.