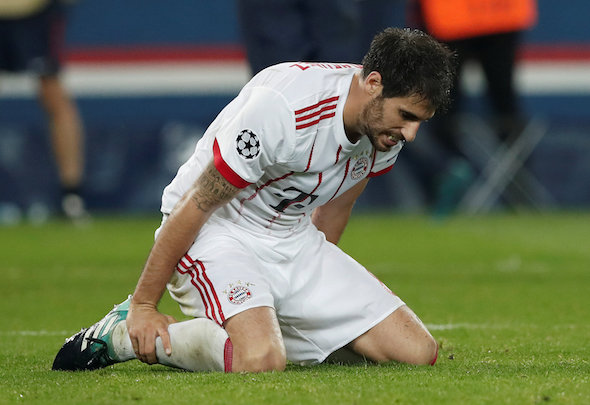 Bundesliga champions Bayern Munich have received a massive blow ahead of their Champions League clash with Celtic as midfielder Javi Martinez has been ruled out.

The 29-year-old suffered a shoulder injury in Bayern’s 5-0 league victory against Freiburg at the Allianz Arena on Saturday afternoon.

The midfielder had to be substituted after the hour mark and new Bayern manager Jupp Heynckes confirmed that the midfield gem would miss the midweek Champions League tie against the SPL champions.

“Javi will miss the game against Celtic,” he said as quoted in the Scottish Sun.

“It is a concern. He’s a tough boy and never usually asks to come off.”

The newspaper also reported that Bayern midfield general Arturo Vidal is also a doubt to face the Hoops on Wednesday evening.

The report claims that Germany international Sebastian Ruby will replace Martinez in the middle of the park for the Bavarian side.

Martinez has been the heart of the Bayern midfield since securing a permanent move to the European giants five years ago.

During his spell in Germany, the Spaniard has picked up a total of five league titles and he was integral in helping Bayern lift the Champions League during the 2012-13 campaign.

In his absence, the Hoops will surely stand a better chance of securing a positive result when they travel to Bavaria for the European tie next week.

In other Celtic news, the club are joint favourites to sign a left-footed midfield creator who has demolished the Hoops in the past.