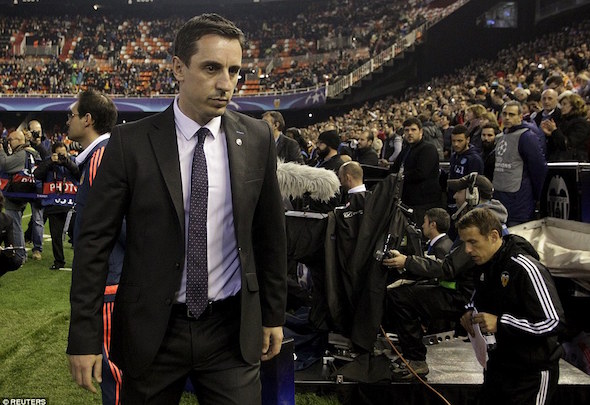 Gary Neville has been sacked by Valencia, the club revealed on Wednesday afternoon.

The Spanish club released a statement on their website to announce that the Englishman had been dismissed with immediate effect.

Valencia have placed Neville’s number two Pako Ayestaran in charge until the end of the season.

Neville left a lucrative pundit’s job with Sky Sports to take the reins at Valencia in early December following the club’s disappointing start to the season.

But the former United defender, who spent his entire playing career at Old Trafford, could not arrest the team’s decline and the club then went on to record a nine-game winless streak in the league under his stewardship.

Valencia did not get their first La Liga win under Neville until 13 February and the side’s agonising elimination from the Europa League two weeks ago effectively signalled the end of their season.

Neville, 41, who was on the England coaching staff during the international break, had initially been appointed only until the end of the season.

In total, he managed the club for 28 matches in all competitions, which included 10 wins, seven draws and 11 defeats.

In a statement, Neville said: “I would have liked to have continued the work I started but understand that we are in a results business and in the 28 games they have not been to my standards or to those which are required by this club.”

Ayestaran worked at the Mestalla between 2001 and 2004, helping win two titles and the UEFA Cup.

He spent three years at Liverpool under Rafa Benitez and has also been the manager of Maccabi Tel Aviv.