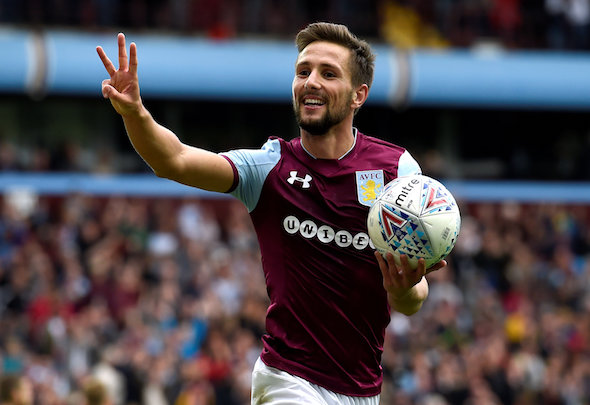 Manager Steve Bruce has told that midfielder Conor Hourihane is finally starting to produce what Aston Villa bought him for after his winning goal in the weekend match against Nottingham Forest.

The 26-year-old midfielder made the switch to Villa Park in January after three impressive years at Barnsley, where he helped the Tykes to win promotion from League One.

The creative player had a slow start to his career at Bruce’s side, returning just one goal in 17 league appearances alongside three assists in his first six months at the club.

However, in the new campaign he is looking much better with four goals in seven league matches already and after his winner on Saturday evening Bruce has told there is still a lot more to come from the Irishman.

“He’s starting to produce what we know he’s capable of,” told Bruce, as quoted by the official Aston Villa website.

“It took him a while – we know he took every free-kick at Barnsley and had the most goals and assists.

“Five goals this season is a great return.

“I still think there’s a lot more to come from him. He’s still getting better and getting used to his surroundings.

“But overall I’m very pleased for him.”

Hourihane signed a three and a half year deal at Aston Villa on his move from Barnsley and will currently have his eyes on playing in the Premier League for the prestigious English club.

His winner on Saturday also lifted the Midlands outfit as high as ninth with just two points separating Bruce’s team from the play-offs after what many considered to be a disappointing start.

Villa’s next two matches also look encouraging with matches coming up against second tier relegation battlers Burton and Bolton in the next seven days.

In other Aston Villa news, Tony Xia has responded on Twitter to a suggestion that he is looking to sell the club.