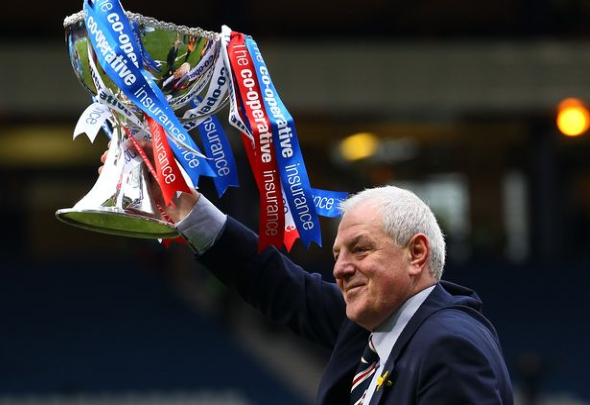 Rangers icon Walter Smith has praised Gers youngsters Jack Thomson, Stephen Kelly, Cammy Palmer and Andy Dallas after playing part of Saturday’s Legends games at Ibrox – and admitted it can be “really awkward” for them to be thrown into such a game.

The Gers kids played alongside a host of Ibrox icons including Ally McCoist, Barry Ferguson, Andy Goram and Mark Walters to raise funds for the club’s charity foundation.

With a handful of Rangers-supporting celebrities also taking part the Gers youngsters were used to fill gaps in the two sides.

Smith joked it was hard to play in a game where some of the players – such as wrestling star Grado – were “not at their fittest.”

“The youth boys did really well. It can be really awkward for them in the sense that they were maybe playing in a position they don’t normally play for the club,” Smith said, as quoted by the Evening Times.

“They were asked to play well out of position and join in with guys who are maybe not at their fittest!”

Smith’s side fell to an 8-3 defeat at Ibrox on Saturday with McCoist helping himself to a hat-trick for his side on his return to Ibrox.

Michael Mols, Peter Lovenkrands, Cammy Palmer and Thomas Buffel were among those who also got their name on the scoresheet as the Gers support rolled the years back and watched some of the best players to have turned out for the club strut their stuff one more time.

Playing at Ibrox with the likes of Ally McCoist, Barry Ferguson, Mark Walters and Jorg Albertz is something any Rangers fan would give anything for and will have been a huge honour for the youth players involved. While some of the stars involved were well past their best, one or two – Thomas Buffel in particular – are still in fantastic condition and look like they haven’t lost a step. Buffel even played the full match last weekend as Genk fell to an extra-time defeat in the Belgian Cup final at the hands of Standard Liege.