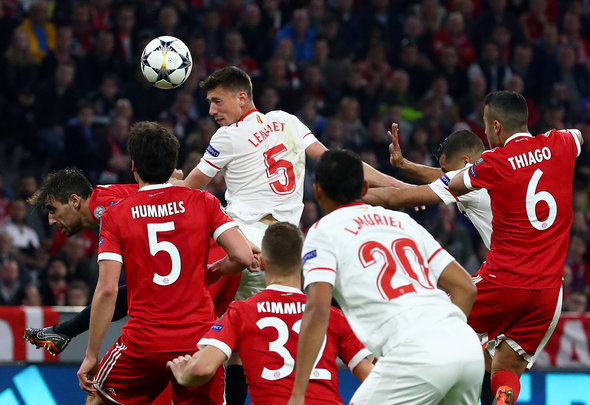 Tottenham would make waves in the footballing community if they could steal in ahead of Barcelona in the Catalan giant’s reported pursuit of Sevilla centre-back Clement Lenglet this summer.

Not only would it signal the Lillywhites’ intentions to break into football’s elite but it would also resolve the defensive headache that has been left in light of Toby Alderweireld’s shut-out from the first-team.

With the Belgian international looking increasingly likely to be out of the exit door this summer after failing to agree a new contract with the North London club, Davinson Sanchez has come in to replace the 29-year-old at the heart of Spurs defence.

At just 21, the Colombian has performed admirably and has for the most part been outstanding.

But against Manchester City, his shortcomings were all too evident as time and time again he was caught short against a superior City attack.

While there’s no suggestion that Sanchez ought to be thrown on the scrapheap because of this, it does spell the need for Mauricio Pochettino to bring in a top quality defender who Sanchez can learn from.

The Frenchman has been integral to Sevilla’s run to the quarter-final’s of the Champions League and were unlucky to be knocked out by Bayern Munich in the last eight.

Despite that, the 22-year-old showed his worth and against Manchester United in the previous round, when he kept both Alexis Sanchez and Romelu Lukaku in his back pocket over the two matches.

It would be one heck of a steal if Spurs could snap up the enforcer, but what a deal it would be – one that could take the club to the next level.

In other Tottenham news, Lucky not to have his teeth punched out – BBC pundit slaughters Tottenham player for ‘shocker.’