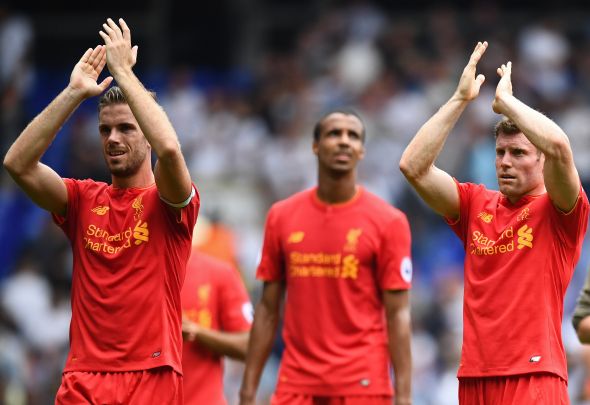 Former Liverpool defender Jamie Carragher has hailed the performance of captain Jordan Henderson in the most recent clash against Everton.

The Reds travelled to Goodison Park for their most fixture with a clash against the Toffees in the Merseyside Derby.

Liverpool ran out 1-0 victors in the encounter with a late injury time goal from summer signing Sadio Mane.

The Senegalese received much of the praise for his role in the win, but Carragher identified Henderson as the player who impressed him against Everton.

“Sadio Mane grabbed the headlines with his injury-time goal — but Henderson’s performance could not go without notice,” told Carragher to the Mail.

“He ensured his side retained their discipline in the first half when Everton tried to make it a fight and then went on to always pick the right pass when Liverpool started to play.

“The game, of course, could have ended disastrously for Henderson, when he was caught by a poor tackle from Ross Barkley — and it was only natural that he was angry during the closing stages about what had happened. He realised the challenge could have broken his leg.

“But what really impressed me was the way Jordan handled himself after the game, defusing the situation with a brilliant interview. He could easily have got caught up in the emotion and said something rash but he dealt with it calmly.

“When he first became Liverpool captain, things were not so easy and it is not wrong to say he struggled with initial scrutiny but everything about his performance at Goodison Park showed how much he has grown into the role.”

Henderson has been a star in the Liverpool team this season, marshalling the centre of the park in 19 appearances in all competitions.

He has only contributed four assists and one goal, but the 31-time capped England international’s role in the side is to allow the attacking players more freedom.

His displays alongside his team-mates have seen Liverpool placed in second, six points behind league leaders Chelsea.

The Merseyside giants will be looking to win their first ever Premier League title, but they will need a loss in form for the dominant Blues team.

Liverpool will face Stoke, Manchester City and Sunderland in their next three fixtures over the Christmas schedule, while Chelsea will battle with Bournemouth, Stoke and Tottenham.

In other Liverpool news, Jurgen Klopp has revealed the Reds’ transfer strategy for January.