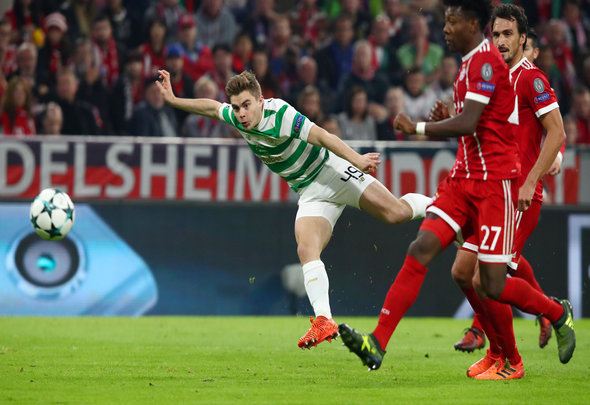 Celtic midfielder James Forrest has given supporters of the Hoops the ultimate boost by saying he wants to remain at the club for the rest of his career.

The 26-year-old has already been at Celtic Park since the age of nine but can’t see himself playing elsewhere.

The right-sided flyer currently has a deal with the Scottish Premiership champions until next summer but it would appear that from his comments ahead of the match against Hamilton Academical on Sunday, that it’s just a matter of time before that is extended.

With 16 goals already to his name this season, his improvement in front of goal is noticeable from the six he totalled in the previous campaign.

As quoted in the Daily Record, Forrest said: “I’d like to stay here for the rest of my career because I’ve only ever played for Celtic. I have to work hard and be at my best every day or I’ll not be here.

“I’d love to be here for as long as I possibly can and hopefully that will happen. It’s strange to even think about playing for any other club, I’ve been here since I was nine.

“Thinking about playing somewhere else is weird. So hopefully I’ll stay here and be successful.”

The 26-year-old is having one of his best seasons for the Hoops – a contender for player of the season – and has already scored ten more goals than he did in the entirety of last season. Celtic fans will undoubtedly be delighted to hear the winger has no intentions of plying his trade elsewhere and with Rodgers at the helm Celtic is a club that’s going places.