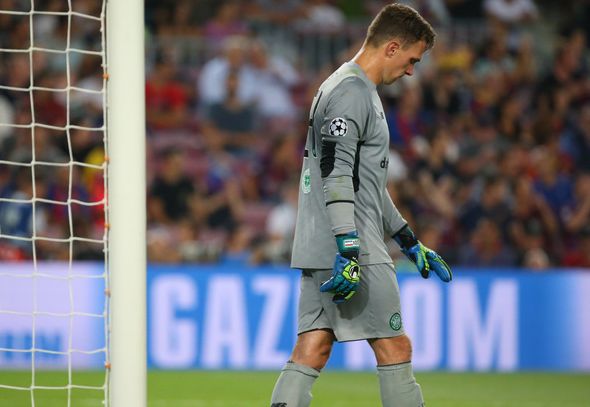 Celtic goalkeeper Dorus de Vries made his return to the Celtic side today in their 1-0 win over Dundee – and fans were raving about his performance on Twitter.

The 36-year-old hasn’t played since being beaten from 45 yards against Kilmarnock in September 2016 but made a triumphant return to the starting XI.

De Vries made a series of fantastic stops to keep the Scottish champions ahead as they extended theur unbeaten run in domestic games to 59.

Brendan Rodgers made seven changes – including the reintrduction of de Vries for Craig Gordon – to his side from the one which drew 2-2 with Hibs before the international break.

The keeper will drop out again when the Hoops take on Bayern Munich in the Champions League in midweek – but fans were impressed with what they saw.

I was worried about De Vries but he won that game for us today. Gamboa had a great game & Henderson showed he still should be in the Squad

Well done Celtic,another victory,@patrick7roberts was on 🔥& Good performance from de vries!! Now it's time for The big bhoys football 🍀#YNWA

De Vries was excellent today and earned his win bonus with a couple of top-notch saves. Tips hat.

De vries just Gordon the biggest wake up call he possibly could today.excellent 2nd half

De Vries made brilliant saves from McGowan, Deacon and El-Bakhtoui to deny Dundee a goal in a fairly even match.

The Dutchman’s performance will have given Brendan Rodgers something to think about as the Hoops face a hectic schedule over the coming months.

Celtic remain level on points with Aberdeen at the top of the Scottish Premiership and travel to Pittodrie to face the Dons once they have played Bayern Munich and next weekend’s League Cup semi-final against Hibernian.

In other Celtic transfer news, the club are joint favourites to sign a left-footed midfield creator who has demolished the Hoops in the past.