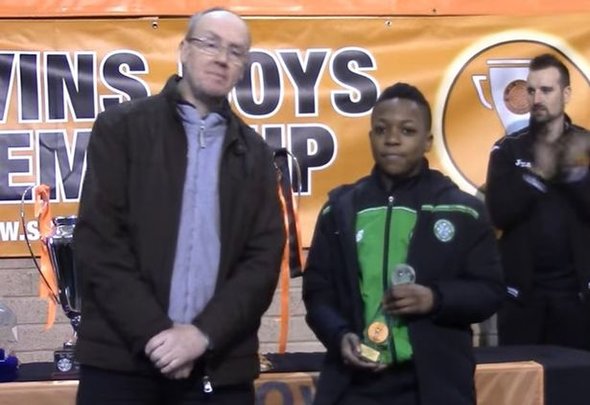 Celtic gave 13 year old Karamoko Dembele his debut for their Under-20s team in Monday’s 3-1 win over Hearts – and fans expressed their shock on Twitter at his amazing precocity.

Dembele, 13, has emerged as one of the shining stars of the Hoops’ academy and was rewarded for his stunning development with a place on the bench against players up to seven years his senior.

The forward then replaced Jack Aitchison in the 81st minute of the game and had a cameo nine-minute spell in his first Under-20’s appearance.

Celtic’s youth side are missing a host of their brightest young talents including Ross Doohan, Anthony Ralston, Mark Hill, Regan Hendry, Calvin Miller and PJ Crossan with the starlets on international duty with Scotland’s Under-19s for their double header against Sweden.

Supporters on Twitter could not believe Dembele was so young, with one fan claiming he should be rewarded for his startling development with a 20-year contract.

Karamoko Dembele will be in the first team at 16 or earlier. 13 years of age on the U20 bench! Unreal @celticfc

13 year old Karamoko Dembele on the bench for Celtic development squad, kick on wee man, the future is even brighter 🍀🍀🍀

Good on the youth coaches at Celtic to give little Karamoko Dembele a go tonight, 13 year old on the bench for their U20's, go on kid

Karamoko Dembele 👏🏻👏🏻👏🏻 raw talent at its fullest. Hopefully Celtic look after him, what a bright future.

The left-footed ace has already been compared to Barcelona star Lionel Messi after his incredible balance, pace and goal-scoring ability.

The youngster recently shone at the St Kevin’s Academy Cup, where he was named as Player of the Tournament.

The starlet is said to have already caught the attention of some of the world’s biggest clubs but is understood to be settled with the Scottish giants.

The decision to play Dembele is believed to have come about after a number of young players have been called away on international duty this week.

In other Celtic news, Mikael Lustig is desperate to sign a new contract with the Scottish Champions, but has revealed that there has been no movement.