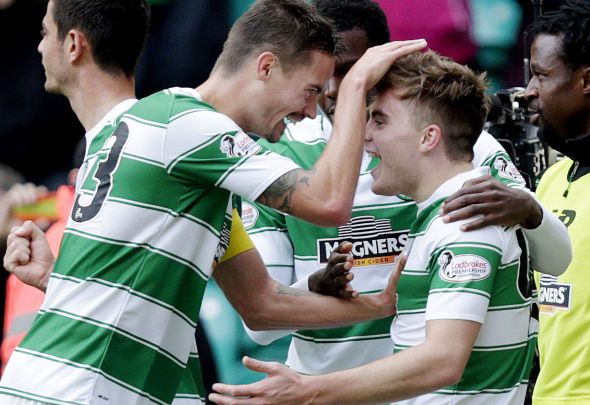 James Forrest played 60 minutes for Celtic on Tuesday night – and the club’s supporters were furious with his performance.

The 25-year-old midfielder was substituted off in the second-half against Borussia Monchengladbach after failing to make an impact.

Celtic earned a 1-1 draw against Borussia Monchengladbach in the Champions League, but still face an uphill battle to remain in Europe.

Lars Stindl scored the opener in the first-half for the host after converting a cross from Thorgan Hazard, but Moussa Dembele earned a point by converting a penalty after the break.

The result leaves the Bhoys bottom of their European group and will need at least one win against Barcelona or Manchester City in their remaining games to stay in Europe.

Brendan Rodgers’ side may now be targeting an unlikely third-placed finish in the group, which would drop them down into the Europa League.

Celtic fans were angry with the display of Forrest and feel that he failed to make a positive impact on the game.

Forrest can have no complaints about getting hooked. He's been poor. #Celtic

Forrest's run to the touchline to be replaced was his most purposeful of the night. #Celtic 🍀

Forrest has been a passenger. Pulling out of tackles, no driving runs, nothing. Wouldn't have him back out for the second half. #Celtic 🍀

After a terrific start to the season James Forrest has reverted to type and is contributing nothing since Man City. Needs some time on bench

Forrest is a product of the club’s academy and broke into the first-team in 2010.

The Scottish winger has been a regular feature in the Celtic team this season and has made 22 appearances in all competitions.

He has contributed with five goals this campaign, but has not scored since a 6-1 league victory against Kilmarnock in September.

Forrest does have competition in the wide position, with Scott Sinclair and Patrick Roberts in good form recently.

In other Celtic team news, Chris Sutton has delivered a Twitter verdict on the club’s midfield duo.