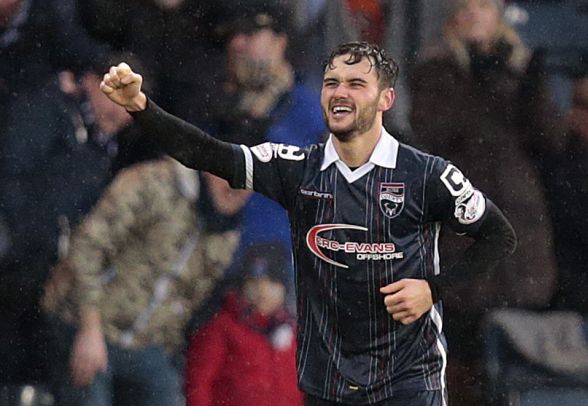 Celtic fans have reacted on Twitter after Ross County’s Alex Schalk was handed a two-match ban by the Scottish Football Association on Wednesday.

Schalk, 24, deceived referee Don Robertson by flinging himself to the ground during Ross County’s 2-2 draw with the Bhoys on Sunday with 90 minutes played on the clock.

Robertson was fooled by the Dutchman, as target man Liam Boyce confidently stroked home the penalty to secure a draw and become just the fourth side this season to take points off champions Celtic.

Boyce’s goal came with just injury time to play after goals from Kieran Tierney and Patrick Roberts had given Celtic the lead either side of Michael Gardyne’s second-half effort.

But former NAC Breda attacker Schalk did not get away with retrospective punishment, as the SFA branded him with a two-match ban for his theatrics.

Celtic fans took to Twitter to react to the news, with some criticising Schalk’s actions while others asking why the referee wasn’t sanctioned for his poor performance.

2 match ban for Alex Schalk. Good enough for any player that blatantly dives nd before some people jump in, yes that includes Celtic players

And the SFA won't care a jot. Governance?

What about that clown Brother Robertson what has happened to him.

Celtic are next in action on Sunday as they take on Old Firm rivals Rangers in the semi-final of the Scottish Cup at Hampden Park, with Aberdeen and Hibernian in the other semi.

In other Celtic news, these three senior Rangers stars will prove key in defeating the Hoops.