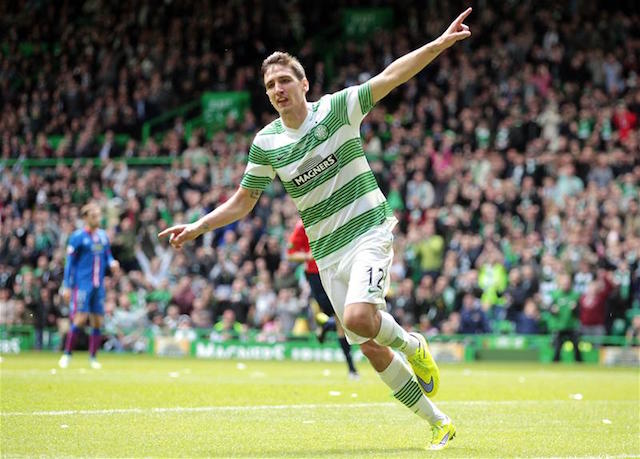 Stefan Scepovic has quit Celtic to make his loan move to Getafe permanent, it was announced on Tuesday.

The Serbian striker spent the 2015-16 season on loan at the Spanish club and responded with six La Liga goals in 34 appearances.

Getafe announced on their official website on Tuesday that Scepvoic had signed a four year deal with the Spanish second-division outfit and joined for a reported fee of £1million.

A statement was released by the Spanish side that read: “Getafe has executed the purchase option on Stefan Scepovic which was set in his loan agreement from Celtic. The player has signed with the club for the next four seasons.”

Scepovic has failed to fire at Celtic Park since his £1.9million transfer from Sporting Gijon in 2014 but has an impressive pedigree.

The 26-year-old forward has won eight senior Serbia caps and scored 23 goals in 39 matches for Gijon in the Spanish second tier in 2013-14.

The former Club Brugge striker has featured for 12 clubs since he graduated to the OFK Beograd first team in 2008.

Brendan Rodgers has sanctioned the move as part of a summer clear out with his new club in which three other forwards have been allowed to leave.

The Irish manager is yet to make any major additions to his squad as Celtic prepare to battle Rangers for the Scottish Premier League for the fist time in four years.

In other Celtic news, Moussa Dembele has finalised a sensational transfer from Fulham.