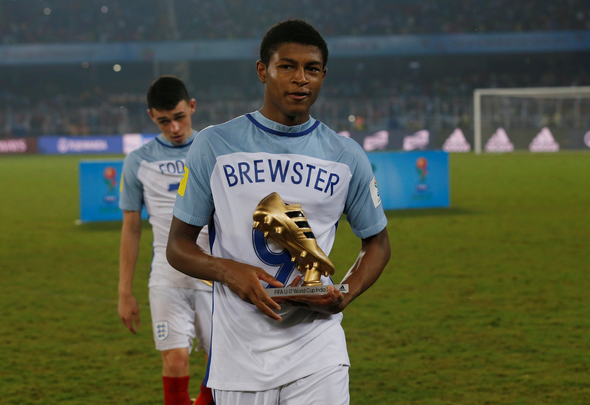 Reports in the last 48 hours, including from Goal, claim Bundesliga duo Borussia Mochengladbach and RB Leipzig are in hot pursuit of the 18-year-old striker and have both tabled offers.

They certainly have a chance to land him, as Brewster is out of contract at Anfield and has snubbed multiple offers from his parent club.

Celtic are also keen on landing the front man, who was part of the England squad which triumphed at the Under-17 World Cup last year and even won the Golden Boot award as the tournament’s top scorer.

The Scottish Herald claimed earlier this month that Celtic are in advanced talks to sign Brewster on a season-long loan and it is “more likely than not” that he will head to Glasgow next season.

There appears to have been a few twists and turns in recent days, and it is time for a delicious hijacking of the Celtic deal by Rangers and their new manager Steven Gerrard.

A key plank of discussions ahead of Gerrard’s appointment was transfers and the budget and wage bill afforded to the 37-year-old to overhaul a squad that has sat in Celtic’s shadows for so long.

He has made a good start by green lighting the signing of Scott Arfield, who was announced on Monday as the first arrival of the Gerrard era on a four-year contract.

The next stage is for the new manager is to make a handful of loan and permanent signings from Liverpool, where Gerrard was the Under-18s coach until a fortnight ago.

He will know Brewster inside out – his strengths, qualities, flaws, areas for improvement – even though he is such precocious that most of his appearances this season were the Under-23s before injury cut his campaign short in January.

Brewster has yet to make his senior Liverpool bow but has scored eight goals in 19 appearances for the club’s Under-23s this season.

He is lightning quick, has excellent movement and has already proved himself to be a prolific goalscorer at age-group level.

With doubts over the futures of strikers Alfredo Morelos, Eduardo Herrara and Jason Cummings, Rangers are in the market for at least two centre-forwards this summer.

The best scenario for Rangers would be for Brewster to sign a new Liverpool contract and then be loaned out for next season, ideally to Ibrox.

Gerrard can use his huge influence to make the deal happen. And, it wouldn’t have be good to do the dirty on Celtic at the same time.