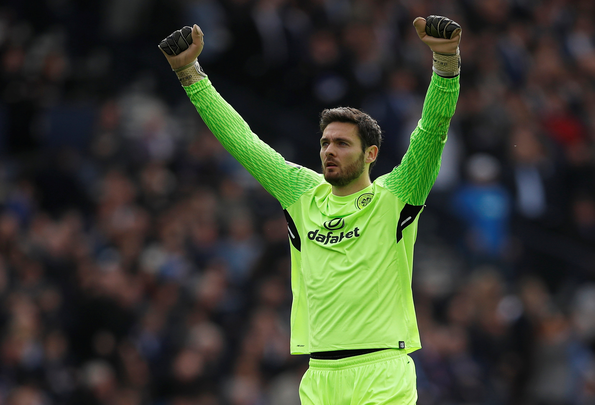 There’s little doubt in Celtic manager Brendan Rodgers’ mind that Craig Gordon is his number one goalkeeper – but that isn’t the case when it comes to the Hoops fans.

Despite being goalkeeper for the majority of the season which sees the Hoops on the verge of a domestic treble, Gordon is still not trusted by a lot of Bhoys supporters.

The biggest issue Gordon has is his distribution, he just isn’t good as passing out from the back, which is a pity as that is what Rodgers wants his goalkeepers to do.

Gordon’s problems were summed up by the first goal the Bhoys conceded in their 2-1 loss to Hibernian. Gordon’s rushed backpass – under no pressure – put Jack Hendry in trouble and seconds later the Easter Road side were ahead.

Gordon’s case hasn’t been helped by the fact that Scott Bain fared so well when he recently deputised in goals for the Hoops when Gordon had a knee injury.

Bain managed to pull off both shot-stopping and distribution with aplomb, but despite this Rodgers elected to restore Gordon to the first-team when he recovered from his injury, and Gordon has been a mainstay of the side when fit, making 43 appearances so far this season.

It seems that no matter how many fans get concerned with his abilities, Gordon is set to keep his place in the side for the remainder of the season and beyond.

In other Celtic news, the Hoops have announced plans for a victory parade next month