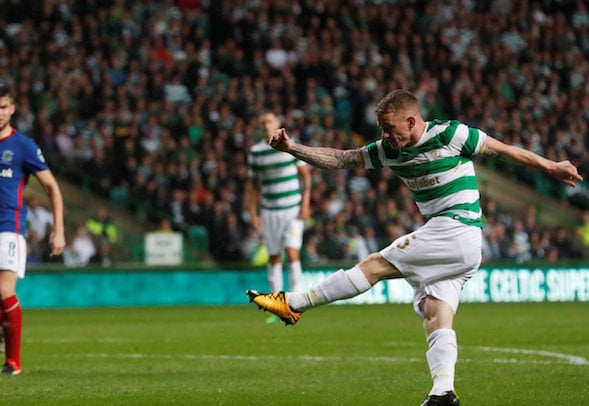 Rather bizarrely, it seems there have been suggestions that Jonny Hayes could be moving on from Celtic, despite only joining the Hoops from Aberdeen one year ago.

There have been claims that his former side Aberdeen and Championship outfit Preston are interested in taking the 30-year-old on loan next season.

Hopefully they are only rumours, as the player deserves a chance to show what he can do after injury wrecked his first season with the Bhoys.

Hayes had just broken into the Hoops first-team on a regular basis and scored his first goal for the Bhoys against Aberdeen when he suffered a season ending leg-break against Dundee on Boxing Day.

The player is once again fit and if he manages to steer clear of injury he is a more than useful squad player for the Bhoys.

He will find it difficult to hold down a regular first-team place for the Bhoys with the likes of James Forrest and Scott Sinclair in the squad, but it shouldn’t be forgotten about that Hayes was nominated as one of Scotland’s player of the year candidates just two seasons ago.

Brendan Rodgers is obviously a fan of the player and it is highly unlikely that he will allow the player to leave the Hoops, whilst he still has something to offer the team and the squad at Celtic Park.

In other Celtic news, the Hoops deserve credit for not breaking up their double treble winning squad