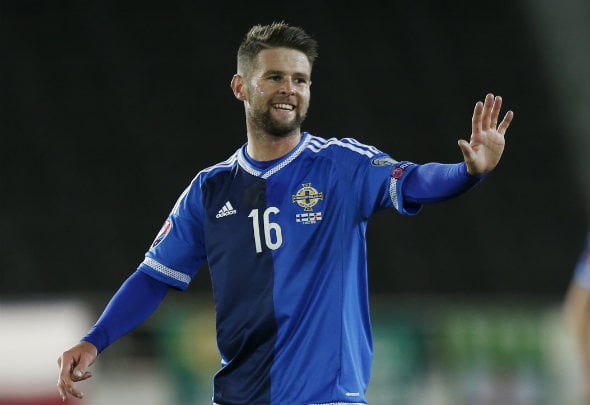 Brendan Rodgers has launched a move for Oliver Norwood, but will have to fend off interest from several Premier League clubs, according to a report.

The Northern Ireland international has been a key figure in Michael O’Neill’s hugely successful side in the last two years and is now being linked with a move away from current club Reading.

Norwood is said to be eager to make the step up and the Belfast Telegraph claim Rodgers has entered the race for his signature.

The 25-year-old enjoyed an excellent season for his club as well as his country, providing eight assists and three goals from midfield in the Championship.

At international level, Norwood played more minutes than any other Northern Ireland player in their qualifying campaign and he has reportedly told his agent to find him a new club as he enters the final year of his contract.

Rodgers is believed to be attracted to the midfielder because of his wide range of passing and the fellow Northern Irishman thinks Norwood could adapt seamlessly to his style of play.

Norwood’s current deal runs until the summer of 2017 and is reportedly being targeted by Premier League new boys Hull and Burnley.

Play-off victors Hull are thought to be leading the race for the playmaker, who is believed to be available for around £1.5million.

However, the Burnley born Norwood may feel a connection to his hometown club and opt to try and take over the mantle from Joey Barton, who left for Rangers earlier in the summer.

Rodgers may have a task on his hands to convince Norwood a move to Celtic would be his best option, with the playmaker keen to make his mark in England’s top flight.

Norwood began his playing career at Manchester United, but never made a senior appearance for the Red Devils and decided to leave Old Trafford in 2012 to pursue first team football.

In other Celtic news, one of the Hoops’ under fire midfielders has revealed he has held talks with Rodgers about his future.