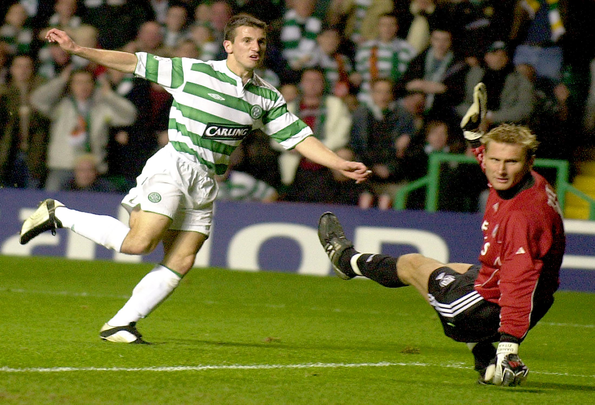 Celtic have paid tribute to Liam Miller on what would have been his 37th birthday on Tuesday.
The former Hoops midfielder, who tragically died recently after a battle with cancer, is shown on the Hoops’ official Twitter account pictured with Alan Thompson after scoring in the Champions League in 2003.
The Tweet reads: “It was On This Day in 1981 that Liam Miller was born. Forever remembered”

It was #OnThisDay in 1981 that Liam Miller was born.

Miller broke into a Celtic team that had the previous year reached the UEFA Cup Final as a 22-year-old in 2003.
He became an instant hero after scoring two memorable Champions League goals in victories against Lyon and Anderlecht.
It wasn’t a surprise that clubs in England took notice of the Irishman, and Manchester United swooped in and signed Miller on a pre-contract agreement.
Some Hoops fans were unhappy about this, but despite that he still managed to end the season as a title winner with the Bhoys.
Sadly his move to Manchester didn’t really work out, as he found it difficult to break into a midfield that included the likes of Paul Scholes and Roy Keane.
After leaving Old Trafford, he had spells playing for the likes of Hibernian, Sunderland and Leeds.
His death at such a young age was marked by an impeccably observed minute’s silence before Celtic’s Scottish Cup tie against Partick Thistle on Saturday.
In other Celtic news, Jamie Carragher has heaped praise on Brendan Rodgers
Don’t miss out on breaking and exclusive Celtic news by clicking here for our brilliant 24/7 updates on Facebook, Instagram and YouTube.