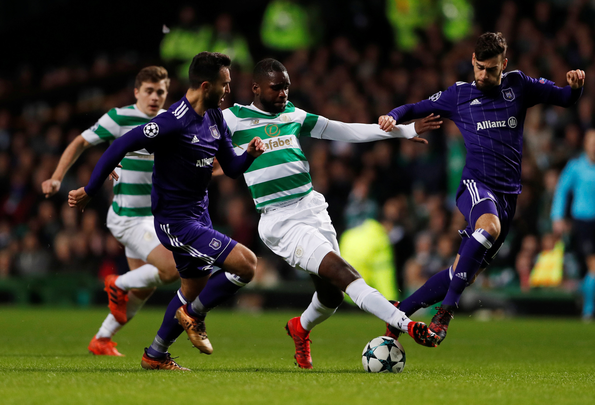 Brendan Rodgers has a big decision to make regarding in-from Hoops striker Odsonne Edouard and Sunday’s Old Firm clash, will he role the dice and give the 20-year-old his first start in the derby?

Edouard came on at half-time against Morton last Saturday and completely changed the game, he was full of power and aggression and the Greenock side couldn’t cope with him.

Obviously Rangers will provide a much sterner test than a Championship side, but Edouard showed enough in the 45 minutes to prove that he is well-worthy of a start against Graeme Murty’s side.

When you consider how poor the man Edouard replaced on Saturday, Scott Sinclair is playing, it makes even more sense that the on-loan PSG striker gets the nod.

Both the summer 2017 loan signing and Moussa Dembele combined to devastating effect in the 3-1 win over Hearts in January, and if the Hoops want to go for the win that would all but clinch their seventh straight title they should gamble on playing the Frenchmen as a striking partnership.

Rangers won’t be expecting Dembele to play, so the element of surprise could work in the Hoops’ favour also, they will be expecting Sinclair to play because of his good record at Ibrox.

An attacking force of Edouard, Dembele, James Forrest and Kieran Tierney could cause the Light Blues all sorts of problems, Rodgers should throw caution to the wind and go all-out to win the game.

In other Celtic news, John Collins has been impressed with Rangers’ recent form