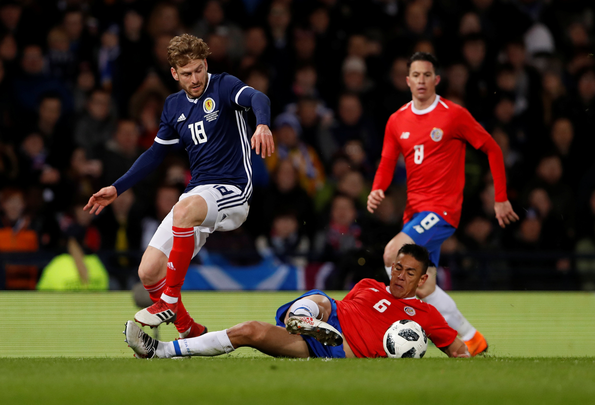 Celtic midfielder Stuart Armstrong has pulled out of Scotland’s upcoming tour of South America, according to a report.

The Evening Times is reporting that the 26-year-old, who has struggled with injuries for most of 2018, pulled out of the rather pointless trip with a hamstring injury suffered whilst appearing as a sub in the second-half of Celtic’s Scottish Cup Final win over Motherwell.

The injury sums up what has been a stop-start season for the midfielder, who has struggled to recapture the form which made him one of the best players in Scotland in 2016-17, when he scored 17 goals and was deservedly nominated as one of Scotland’s four players of the year.

The Celtic players who will still be going on the tour are Scott Bain, Jack Hendry, Ryan Christie and Lewis Morgan

It has been a poor season for Armstrong, and his latest injury in the Scottish Cup Final sums up a year he would rather forget. Whilst the Scotland tour seems to be a bit pointless for all involved, it would have given Armstrong the chance to further establish his credentials as one of the first-team regulars for the national team, and sadly that is not going to happen. What happens next with Armstrong is up in the air, as he only has one year left on his contract and the Hoops will have to decide if they should sell him, as it seems very unlikely that he is going to sign a new deal with the Bhoys after signing what amounted to being only a one year contract extension with the Hoops. If Armstrong’s time at the Hoops is up, it is a disappointing end to what could have been a great career with the Scottish champions, but it looks more like he had one good season amidst some mediocre ones.

In other Celtic news, Tam McManus thinks the Hoops could win the treble for the third season in a row