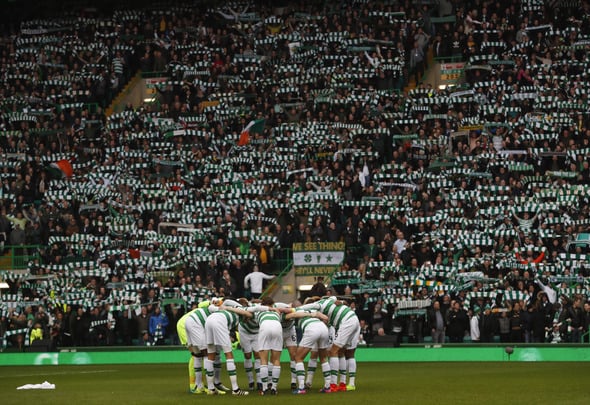 Celtic moved three points clear at the top of the Scottish Premiership by strolling to a 3-0 victory over Aberdeen at Pittodrie on Wednesday night, extending their unbeaten domestic run to 61 games.

Kieran Tierney scored a goal of the season contender in the first-half before strikes either side of half-time from Moussa Dembele helped the Bhoys move ahead of the Dons in the table as they look to secure yet another title.

Celtic opened the scoring in the 13th minute when Tierney scored his first Premiership goal of the campaign with a thunderbolt of a strike.

With his back to the goal, Rogic squeezed a brilliant ball past the host’s defence, through to Moussa Dembele, who proceeded to play a ball across the six-yard box that was first missed by Callum McGregor.

However the stray ball fizzed into the feet of Tierney, who was on hand to hammer the ball in off the bar from an acute angle.

Tierney and Dembele combined again in the 38th minute to double the Hoops’ lead.

The marauding full-back bombed down the left flank, breezing past the Dons defence, before launching a deep cross into Dembele, leaving the Frenchman with very little to do bundle the ball into the back of the net.

After the break, Aberdeen came out looking dangerous but the first biggest chance fell to Celtic as Joe Lewis made a brilliant one-on-one save to deny James Forrest as Kari Arnason pulled off a goal-line clearance to deny the follow up.

However it wasn’t long for the gap to go up to three goals as Stuart Armstrong’s deep free kick from out wide was headed down by Dedryck Boyata, who found an unmarked Dembele to tap in from a couple of yards in the 63rd minute.

Celtic face Steve Clarke’s Kilmarnock at Parkhead in their next fixture on Saturday.

After that is a monumental tie against Bayern Munich in Glasgow in a game where Rodgers will no doubt be left with a selection headache after a wonderful display against Aberdeen.

In other Celtic news, the Hoops have jetted out on a mission to gear up their pursuit of this goalscoring defender who was valued at £17million less than 12 months ago.