Eden Hazard should be rested while John Terry, Oscar and Willian return to the starting line-up in Chelsea’s best possible XI for Sunday’s Premier League clash against Middlesbrough

The Blues are expected to have a full squad available for their game against the league newcomers but they should make a few changes to ensure the squad is properly rotated following the international break.

Hazard picked up a knock while playing for Belgium and, though he has been confirmed as fit to play, it would be more prudent to err on the side of caution and rest Chelsea’s star attacker.

The Brazilian duo of Oscar and Willian should be given an opportunity to impress. Oscar has not started a league game since the end of September while Willian’s last start came against Hull on the opening weekend of October.

Oscar and Willian have been overlooked in recent weeks in favour of Pedro but the former Barcelona star should make way along with Hazard to give the Brazilian duo a chance to shine in the new-look 3-4-3 formation.

Diego Costa also picked up a minor knock during the international break but if he should definitely start as he has already scored nine league goals this season and is one of the most in-form players in the Premier League.

Chelsea haven’t conceded a league goal since they were humiliated 3-0 by Arsenal at the Emirates just a week after losing 2-1 to Liverpool at Stamford Bridge.

Conte may want to keep the same back three he used against Everton but Terry should also be given an opportunity against Middlesbrough, who present one of the weaker oppositions in the league.

The Blues’ skipper will need time to adapt to the new formation should he be called upon in the future so his compatriot Gary Cahill should make way for Terry to gain some valuable minutes.

Alongside Terry, Cesar Azpilicueta and David Luiz should retain their places as well as goalkeeper Thibaut Courtois.

N’Golo Kane and Nemanja Matic should line-up in their familiar roles in midfield, while Victor Moses and Marcus Alonso also deserve to keep their places on the wings.

In other Chelsea news, the club are considering a January loan move for this midfield rising star. 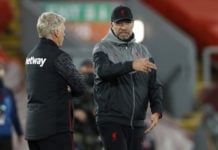