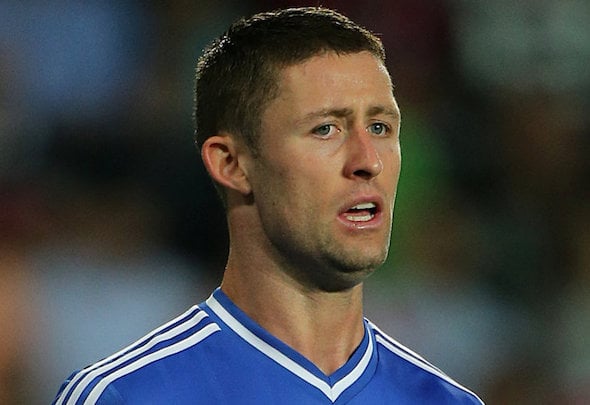 Gary Cahill believes that the Chelsea game against Tottenham will have a “big edge” to it.

The Blues host Spurs on Saturday in the Premier League and the pair will meet for the first time since the ugly encounter in May.

Chelsea earned a 2-2 draw at Stamford Bridge which handed Leicester the title, but the match was marred by 12 yellow cards in a fiery clash.

Mauricio Pochettino’s side picked up nine of the bookings and midfielder Mousa Dembele was subsequently served a six-game ban after his clash with Diego Costa.

Cahill predicts a huge game between the two London clubs on Saturday as the Blues look to stretch their lead at the top of the table.

“With Chelsea, all of the London clubs have that sort of edge, but this one certainly has a got a big edge,” Cahill told talkSPORT. “I think it’s because of the history between the clubs and the history of results like last season that has made this fixture special.

“But ultimately for us and for Tottenham, it’s the type of game of that players want to play in, and it’s a case of bring it on.”

Chelsea and Spurs have the two best defences in the league season, with the latter marginally edging it with eight goals conceded in the opening 12 games.

The Blues are four points ahead of their London rivals and have won their last six league games without conceding.

Cahill has been pivotal to the club’s recent success and formed a strong partnership alongside David Luiz and Cesar Azpilicueta in back three.

The 30-year-old has played in every league game this season under Antonio Conte and Chelsea are currently the in-form team in the division.

Spurs have won just once in their last nine games across all competitions and will be fired up for Saturday’s game at Stamford Bridge.

In other Chelsea news, Stan Collymore has predicted the club’s upcoming match against Tottenham.