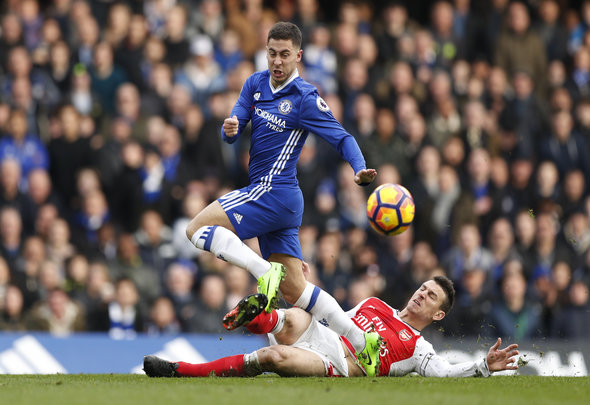 Arsenal will be without the suspended Laurent Koscielny for their upcoming FA Cup Final showdown with Chelsea – and Blues fans on Twitter are delighted.

The Gunners defender was shown a straight red card for a rash challenge on Enner Valencia during the 3-1 win over Everton on Sunday, and will miss the Final through suspension.

They have looked all-at-sea defensively without the Frenchman in their line-up, with their Champions League capitulation at the hands of Bayern Munich earlier this season occurring following Koscielny’s withdrawal.

However, Arsenal could also be without another two key men in Gabriel Paulista, who was carried off with an injury concern against Everton, as well as the ever-present Shkodran Mustafi.

Yet while the potential triple blow will be grim reading for Arsenal fans ahead of the cup Final, Chelsea fans took to social media to rub further salt in the wounds of their rivals.

Koscielny to miss FA Cup final against Chelsea after receiving red card against Everton. Another gift 🎁

No Koscielny for the FA cup final! 🙌🏾

Lol. Koscielny making the FA Cup final even easier for us to win. Hehehe #CFC

Koscielny out of the cup final 😂😂😂

Mustafi, meanwhile, missed the 3-1 win over Everton at the Emirates with illness, but could return to action in time to feature against Chelsea.

Wenger has attempted to solve their problems of late by switching to a back-three, but with his resources depleted, another tactical switch could be on the horizon against Chelsea.

Rob Holding is almost certain to play a key role, while Per Mertesacker could also be in line to make only his second appearance of the season.

The FA Cup Final represents Arsenal’s only chance of success this season, having failed to finish in the Premier League’s top four, and fail to qualify for the Champions League for the first time in 20 years.

In other Arsenal news, the club are reportedly plotting an £8.6million bid to end long-term pursuit for Serie A sensation.