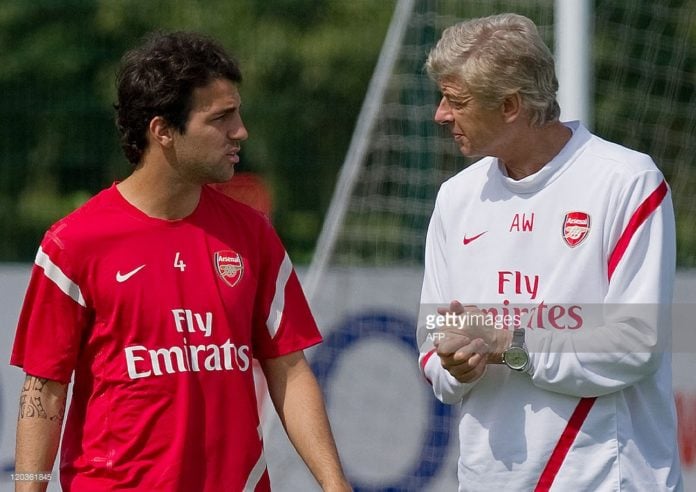 By Arsenal correspondent Tony Hughes
Cesc Fabregas has already peaked due to the amount of football he has played in his career, according to Arsene Wenger.
The Chelsea star is only 28 but Wenger believes the Spaniard’s best days are behind him because he has already spent 12 years at the top.
That is why the Arsenal boss, who handed Fabregas his professional debut at 16, made him a first-team regular at 18 and managed him for eight years, chose not to meet Barcelona’s £30million asking price in the summer of 2014.

Fabregas instead moved to Chelsea and began last season in scintillating fashion as the team charged to the Premier League title but his form petered out in the final months of the campaign and he has had an ineffective start to 2015-16.
He has started all five of the champions’ league fixtures but was substituted for the second time this season in Saturday’s 3-1 defeat at Everton.
Fabregas is yet to be credited with an assist this season after topping the Premier League assists chart with 18 last season and the axe is now hanging over him for the first time in his Chelsea career.
Arsenal had negotiated a first-option clause in the deal that took Fabregas to Barcelona in 2011 but did not take it up because Wenger felt the then-27-year-old had already started the downhill descent in his career.
“Arsene thought he had seen signs that Cesc had already peaked,” one well-placed Arsenal source told Football Insider. “Don’t forget, he started very young and had played a lot of top-level football by his mid-20s”.
The Spaniard has made a total of 503 club appearances for Arsenal, Barcelona and Chelsea supplemented by 96 international caps.
Fabregas spent eight seasons at Arsenal and under the terms of the buy-back option, the Spanish club were obliged to inform the north Londoners if another club made a formal bid for the player and give them the opportunity to match it.
Football Insider understands that Arsenal were told of bids from Chelsea and Manchester City and were genuinely interested in bringing Fabregas back to Emirates Stadium.

However, Wenger valued the Spain international at around the £25m mark and was not willing to sanction a bid that would have matched the offers made by Arsenal’s Premier League rivals.
Nevertheless, he has been an integral figure in Jose Mourinho’s team, leading the Premier League assists chart with 16, and in May added his first Premier League winner’s medal to the League Cup gong he collected in February.