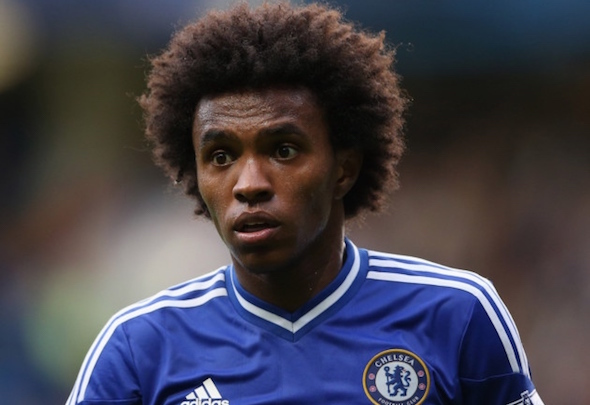 By Editor Wayne Veysey | Former Evening Standard, Press Association and Goal chief correspondent with 17 years experience of breaking big stories, including exclusives like this
Follow me on Twitter @footyinsider247
Willian is close to agreeing a new five-and-a-half-year Chelsea contract, Football Insider sources understand.
The Brazilian midfielder is expected to become the third senior Blues player to commit to fresh terms in a short period following Gary Cahill and Ramires.
Chelsea announced earlier this month that Cahill had signed a new agreement running until 2019, while Ramires put to paper on a five-year deal last month.
Willian, 27, is out of contract in the summer of 2018 and the Premier League champions have begun preliminary discussions about an extension. A Chelsea source has told Football Insider they are hopeful of having an agreement in place within weeks.
Willian is Chelsea’s leading scorer this season with six goals and has been the most consistently impressive player for the club during what has been a mostly wretched campaign.
He had been fighting for his place in the team following the summer signing of Pedro but the Brazilian has started 18 of the club’s 21 Premier League and Champions League matches to establish himself as one of the first names on Jose Mourinho’s teamsheet.


By contrast, there are doubts surrounding the futures of a number of Willian’s team-mates, including the likes of Oscar, Costa and Eden Hazard.
Willian has particularly caught the eye with his set-piece deliveries, scoring four free-kicks.
He is set to be part of the Chelsea squad that travels to in-form Leicester in the Premier League on Monday night as Mourinho’s team attempt to climb from their lowly 15th place in the table.