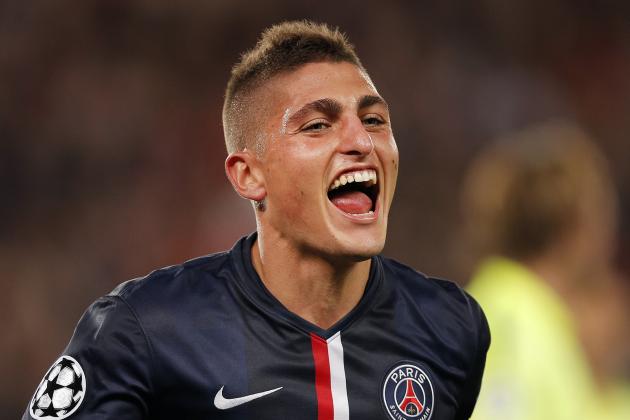 Chelsea are interested in signing Paris Saint-Germain midfielder Marco Verratti in January, according to a report.

The Mail claim that the Blues have prioritised the 24-year-old in the January transfer window and will offer £30million, but the French club are set to hold out for a higher price.

The report details that Chelsea are confident of securing a deal for less than £40million despite his current contract set to expire in 2021.

Chelsea manager Antonio Conte worked with Verratti during his spell as Italy’s national team manager and he could move to Stamford Bridge to replace midfielder Oscar, who is reportedly set to move to China in January.

The Mail have reported that Chinese Super League club Shanghai SIPG are set to complete a £52million move for Oscar in the January transfer window.

Chelsea are currently six points clear at the top of the Premier League and are prepared to bolster their squad in January to help their title bid.

Verratti has established himself as an important player at PSG in recent seasons and has won four Ligue 1 title with the club.

The central midfielder is regarded as one of the best in European football and Chelsea have experienced his talents first hand in the Champions League.

The combative midfielder has made 177 appearances for PSG, but could follow in the footsteps of Zlatan Ibrahimovic and David Luiz by swapping France for the Premier League.

Chelsea should certainly stick with Verratti as their top target in January and secure his move to Stamford Bridge. The 24-year-old has been regarded as one of the best young midfielders for years and is now entering the peak of his career. The Italian would be an upgrade on the likely departing Oscar and would improve competition for places. Conte prefers a 3-4-3 formation this season and Verratti would compete alongside N’Golo Kante, Cesc Fabregas, Nemanja Matic and Nathaniel Chalobah for a starting spot. Verratti’s signature would also land a huge psychological blow to their title rivals and state their ambitions this season. Blues manager Conte already knows the strengths of the player and he looks like he could become a popular player at Stamford Bridge.

In other Chelsea transfer news, Martin Tyler has given his verdict on the midfielder’s proposed move.