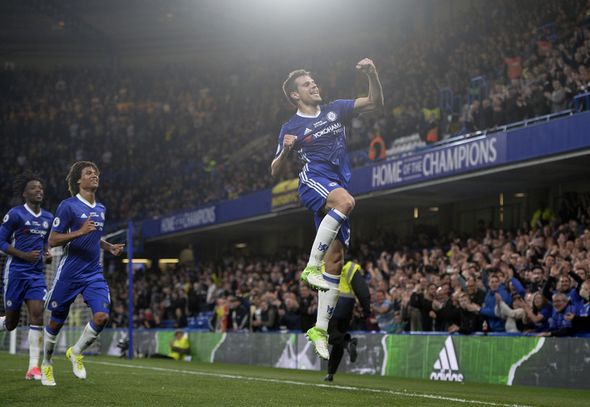 Football Insider rates the Chelsea players during their 4-3 win over Watford in the Premier League on Monday night.

Asmir Begovic 6 – Could do very little to prevent any of Watford’s three goals. Let down by his defence for the first two.

Nathan Ake 6 – Twisted and turned by Daryl Janmaat for Watford second. Could perhaps have done better. Otherwise, no real concerns.

Kurt Zouma 4 – Looked rusty, but understandable given lack of regular opportunities. Could do with a loan spell to get back to his best. A fringe player at best, as it stands.

Cesar Azpilicueta 8 – Underrated. Performs at the top level week-in, week-out. Regained the lead with a superb strike shortly before the break, and defensively sound throughout.

Nathaniel Chalobah 6 – Had a quiet first-half, but improved in the second, showing more intent on the ball. Will be tough to earn regular action, though.

Willian 7 – Change of pace proved too much for Watford. Timing of runs and hold-up play were second to none.

Eden Hazard 7 – Took up some fantastic positions. Had to do a little more work in the absence of Diego Costa, but his direct running caused problems for Watford.

Michy Batshuayi 6 – Supported his case for an important role next season with a second goal in as many games, albeit with a tap-in.

Ola Aina 6 (for Kenedy 75) – Helped protect the lead, but did little else.

Cesc Fabregas 7 (for Chalobah 79) – Made such a difference since being introduced, and grabbed the winning goal.

In other Chelsea news, Premier League newcomers Newcastle are plotting a triple raid for this Chelsea contingent.