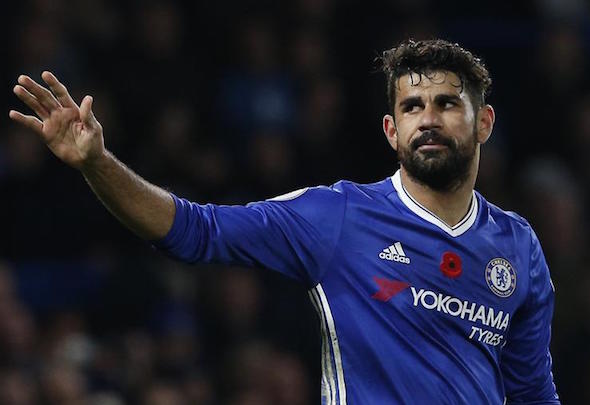 Thibaut Courtois 6 – Was left helpless against Gary Cahill’s own goal and made a couple of good saves to keep his side in the game.

Cesar Azpilicueta 5 – Was caught out of position on several occasions and struggled to deal with the Manchester City movement.

David Luiz 7 – Looked the most assured Chelsea defender in a worrying performance, with several great tackles on Sergio Aguero. Went unpunished for an obstruction on the Argentinian.

Gary Cahill 5 – Found it very difficult against David Silva and Kevin De Bruyne. Conceded a sloppy own goal after attempting a clearance at the near post.

Victor Moses 6
Delivered some good crosses, but was tested a lot more defensively by Leroy Sane.

N’Golo Kante 7
Showed how crucial he is to the Chelsea 3-4-3 system and demonstrated fantastic positioning. Was guilty of a few sloppy passes, but made up for them with numerous interceptions.

Cesc Fabregas 7
Made a great comeback on his return to the side and didn’t look out of place alongside N’Golo Kante. Made a great assist for Diego Costa’s goal with a lovely chipped ball over the defence.

Marcos Alonso 5 – Was pegged back constantly by Manchester City and caught out of position on several occasions in his most difficult game for Chelsea.

Pedro 6 – The attacker looked positive in the first-half and even showed some defensive qualities. He was forced off early in the second period with a suspected injury.

Diego Costa 9 – Delivered the complete centre forward display in the second-half, firstly netting a fantastic goal after controlling a Cesc Fabregas pass. The 28-year-old put through Willian to score the second and his link-up play was sensational.

Eden Hazard 8 – Linked up well with Diego Costa in the first-half and proved he is back to his best with some confident dribbles. Scored a late third goal on the counter attack and takes his tally to eight goals this season.

In other Chelsea news, Pat Nevin claims that the club’s defender spooked Tottenham.