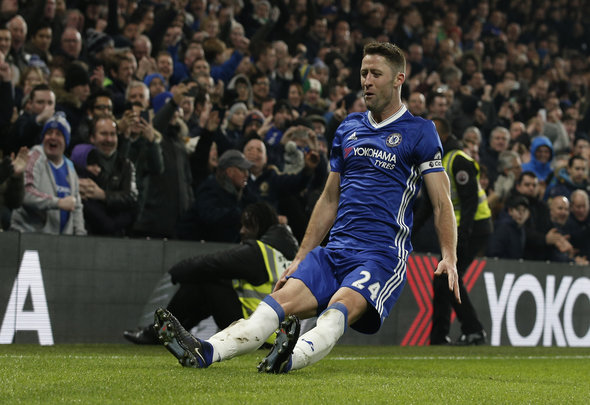 Football Insider rates the Chelsea players after their 1-0 victory against Manchester United in the FA Cup quarter-finals.

Thibaut Courtois 7 – He was only called into action on one occasion and denied Marcus Rashford brilliantly, sign of a top-class goalkeeper.

Cesar Azpilicueta 6 – The Spaniard managed to deal with United’s threat in the early stages and is Mr Reliable.

David Luiz 6 – He would have been relieved that Zlatan Ibrahimovic was suspended and was quiet as a result.

Gary Cahill 5 – Saw his effort saved fantastically well by David De Gea in the first-half and was fairly untested for the most-part. However, was targeted when it was 11 v 11 and was wasteful in possession. A possible weak link for Chelsea and teams may look to exploit.

Victor Moses 6 – He was involved in a tough battle with Ashley Young throughout. Supported the offensive play well.

N’Golo Kante 9 – Another masterclass from the combative midfielder, who was constantly dispossessing the opponents. Opened the scoring with a long-range effort that was curled into the bottom corner.

Nemanja Matic 6 – He came into the side for Cesc Fabregas and just sat in front of the defence, was fairly quiet during the game.

Marcos Alonso 6 – The left wing-back supported the attack well and continues to be a consistent performer.

Willian 6 – Was given the chance to start ahead of Pedro and showed some nice pieces of skill. However, is likely to be replaced by the Spaniard for the next league clash.

Diego Costa 7 – A fiery battle with Marcos Rojo showed the ugly side of his game, but he showed his true qualities during the game and is in great form.

Eden Hazard 8 – The creative spark and the most eye catching player on the pitch. Continuous fouling on the Belgian caused Ander Herrera to be sent off in the first-half. Was unplayable at times and a joy to watch.

In other Chelsea news, Romelu Lukaku has revealed he is inspired by the club’s legend.