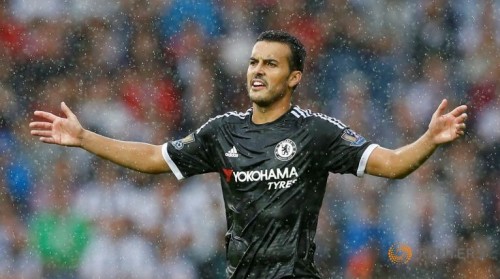 By Coral Barry
Loic Remy and Pedro will play no part in Chelsea’s Champions League clash with Dynamo Kiev on Tuesday night.
Both players appeared in the Premier League champions’ 2-0 win over Aston Villa at the weekend but neither travelled with the squad to Ukraine.
Ahead of the game tomorrow night, Jose Mourinho explained that Remy and Pedro are struggling with minor injuries.
“We have other options and it would be big risk to play them,” he said.
One of those options is Eden Hazard who was dropped for the victory over Villa but Mourinho was tight-lipped when asked about the possibility of the Belgian starting tomorrow.
“I won’t tell you if he will play… they [Dynamo] won’t know.”
Prompted to comment on how Hazard trained, the manager’s answer was just as vague. “He trained like Eden.”
Mourinho insisted that a positive result in the Champions League group stage match would be another step forward following the victory over Villa.
He said: “As we improve results, we improve our confidence.
“We had too many bad results at the beginning of the season, but hopefully now we can go in the right direction.”