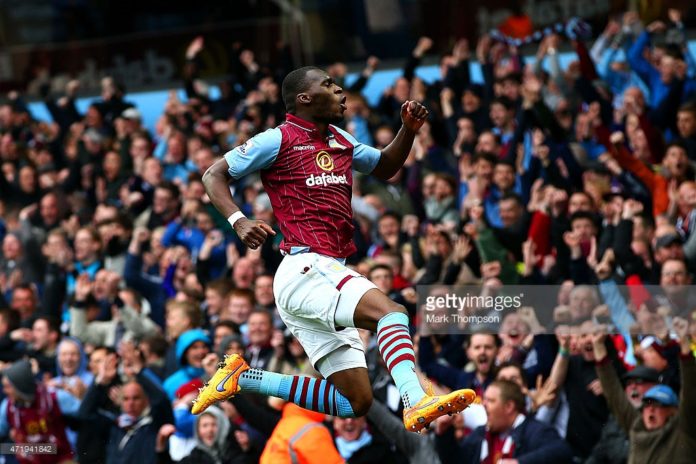 EXCLUSIVE | By Merseyside correspondent Cam Downes
Christian Benteke is set to undergo a Liverpool medical on Monday after agreeing personal terms with the club, Football Insider sources understand.
The Belgium international will complete his transfer to Anfield next week after Liverpool triggered the £32.5million release clause in his Aston Villa contract.

The Merseysiders offered the full sum of the striker’s release clause with the bid tabled on Thursday and will now make him their most expensive summer signing within days.
Benteke is set to link up with Liverpool on their pre-season tour of Australia and the Far East after agreeing the terms of a five-year contract.
Brendan Rodgers’ team have made their move after weeks of talks with Villa, and amid growing interest in the player from Manchester United.
United are in the market for new two strikers following the departures of Robin van Persie and Radamel Falcao, with the likes of Edinson Cavani on their target list.
But it is Liverpool who have captured the 24-year-old, and only the formalities of the deal are now left to complete.
Liverpool first made contact with Villa with a valuation of £25million, but the Midlands side were never interested in dealing at that price.
Liverpool have had to relent and pay the full £32.5million to land their number one summer target. The Merseysiders been the busiest Premier League club in the summer transfer window, signing seven new players, including a new forward in Danny Ings.
But Brendan Rodgers and the Anfield recruitment team have wanted another senior striker to provide competition for Ings, Divock Origi and the injury-prone Daniel Sturridge.
They are set to land Benteke at the start of next week. Benteke finished last season in impressive form, scoring 12 goals in Villa’s last 14 matches to end an injury-interrupted campaign with 15 goals. He was also caused the Liverpool defence huge problems in Villa’s FA Cup semi-final win at the end of the season.

As revealed by Football Insider in March, Liverpool will free up space in their squad by listening to offers for Mario Balotelli, Rickie Lambert and Fabio Borini this summer.
Balotelli is in talks with Fiorentina after being left out of the Liverpool squad that left the UK last Sunday to tour Australia and the Far East.