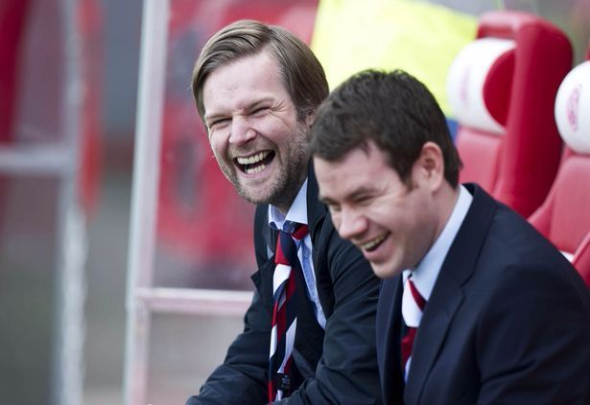 Southampton chairman Ralph Krueger has claimed Ross Wilson told him over lunch last week he is “committed” to remaining at the club.

Wilson has reportedly emerged as Rangers’ top target to fill the newly created director of football role at Ibrox.

Sky Sport claim on their website that the Scottish giants are keen to prise the director of scouting and recruitment from Premier League club Southampton for the more senior role at Ibrox.

It is said that Wilson, formerly of Falkirk, Huddersfield and Watford, is Rangers’ “preferred choice” for the technical director post, which has been created as part of a major management restructure.

Krueger has admitted that it is testament to Southampton’s own recruiting that the 34-year-old Scot is attracting interest.

“For us, it’s always a compliment,” Kreuger said, as quoted by the Scottish Sun. “People always seem to want to come to us to look at our personnel.

“It’s part of our daily oxygen that we have. I spoke to Ross last week and we had lunch together and he’s very committed and excited to stay with us.

“But for us, we never believe that everybody needs to stay with us forever.

“When you grow as a club, people will come, people will go and at the moment Ross Wilson is an important part of our group and seems committed to where we are moving.

“But compliments to the club, it’s to the compliments of the football that we are getting looked at, at all different levels.”

Rangers are interviewing candidates to become both the new manager and the director of football following the acrimonious departures 17 days ago of Mark Warburton, David Weir and Frank McParland.

Former Liverpool and Brentford employee McParland was head of recruitment but the new position will have greater powers and a wider remit.

Wilson already has experience of working in Scottish football after spending seven years at Falkirk between 2004 and 2011 in a ‘head of football development and football administration role.’

He has since worked at Watford, Huddersfield and current club Southampton, who have all punched above their weight in recent years.

Rangers are in need of a more coherent strategy after a disappointing campaign that has left battling to secure a top-three league finish.

The club are a remarkable 33 points adrift of runaway leaders and bitter rivals Celtic after sinking to their second consecutive defeat on Friday against lowly Inverness.

To compound what has become a wretched campaign, Rangers have also dropped nine points adrift of second-placed Aberdeen.