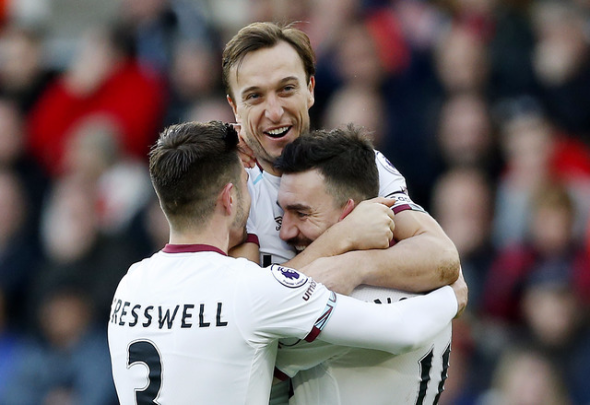 Ray Stewart has revealed how West Ham ace Robert Snodgrass stood out from Leigh Griffiths during their time at Scottish club Livingston.

The attacking duo came through the ranks at the West Lothian club at the turn of the millennium while Stewart was in charge of first team duties.

Since then, playmaker Snodgrass has become an experienced campaigner in the Premier League, while striker Griffiths is plying his trade with Celtic.

Furthermore, both have also represented Scotland on the international stage, with Snodgrass currently earning 20 caps to Griffiths’ nine.

Club legend Stewart, who won the FA Cup with West Ham during his time as a defender, had this to say about Snodgrass and what he thought of him when he was coming through the system at Livingston.

“I can’t take any credit,” Stewart told the club’s official website. “I was obviously responsible for the first team at the time and Robert broke through after I left, but his name was always mentioned as one to watch in the future.

“A guy named Tony Taylor was the head of the youth set-up at that time when Livingston had a great reputation for bringing players through. The likes of Graham Dorrans and Leigh Griffiths all came through their system, but Robert was always the one who stood out.

“His career has gone from strength to strength since those days, and I’m so delighted he is at West Ham now.”

Snodgrass is yet to lift any silverware as a player, while Griffiths has lifted the Scottish Premiership with his current team.

Free-kick specialist Snodgrass made a transfer switch to the London Stadium from newly-promoted Hull during the January window after a string of impressive performances.

He has played 26 games in all competitions this season, scoring nine goals and providing four assists.

By contrast, Griffiths has played 20 SPL, Champions League and League Cup games, finding the back of the net on eight occasions.

In other West Ham news, supporters react on Twitter as this senior man set for reported contract talks.