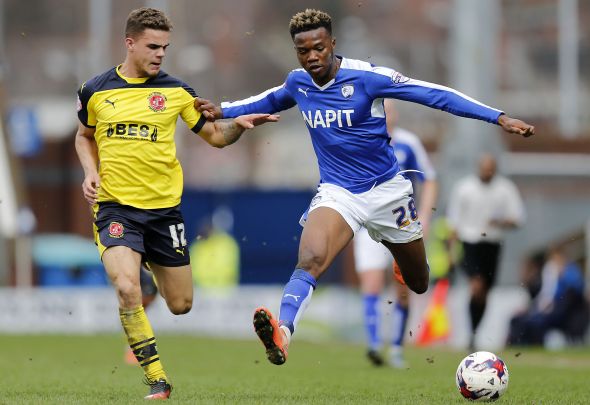 Chesterfield have announced that they rejected a bid from Barnsley for former Leeds winger Gboly Ariyibi.

The League One club revealed on their official website that manager Danny Wilson had opted to reject the deal, and he said the offer was no where near their estimations.

“We received an offer from Barnsley for Gboly, which can only be described as derisory for a player of his ability and potential,” Wilson told the website. “The offer was rejected out of hand.
“I am keen to keep Gboly as he is very much part of my plans and I know that the board share the same view.”

Ariyibi, 21, joined Leeds in 2013 after he was released by Southampton, but the winger was a flop at Elland Road.

He largely spent his time in the academy team and failed to have much impetus on the first team, playing on just two occasions that totalled 73 minutes of game time.

He was subsequently released by Leeds in May 2014, and it wasnt until August that Chesterfield offered the winger an opportunity.

The American had a relatively quiet first year but shone in Chesterfield colours last season, and has caught the eye of Barnsley.

In total for Chesterfield he has played 64 times, scoring four goals and adding a further 11 assists.

Leeds have added two nippy wide men this summer, and they will hope Kemar Roofe and Hadi Sacko can have a greater influence on the first team.

Roofe has arrived from Oxford, having shone in the 2015-16 and he was named League Two player of the season before his £3million move to Yorkshire.

Sacko on the other hand has signed a season long loan from Sporting Lisbon, and has instantly shone and picked up an assist in their 2-0 win over Sheffield Wednesday on Saturday.

In other Leeds news, a manager has given an update on reported Leeds interest in player with 168 Premier League appearances