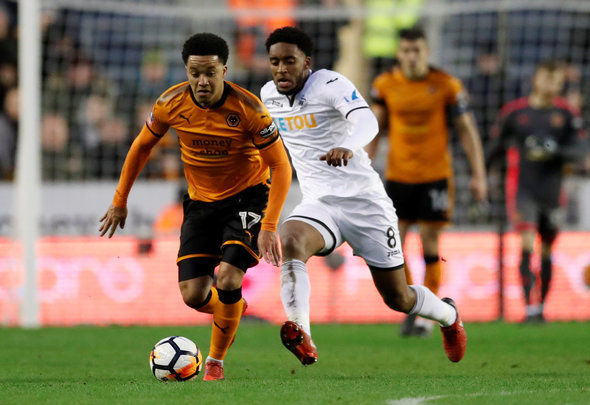 Swansea City have confirmed that midfield star Leroy Fer is available to star for the club’s clash against Newcastle United on Saturday after seeing his sending off against Wolverhampton Wanderers overturned.
The Swans revealed via their official Twitter account and website that, following an appeal to the Football Association, the 28-year-old’s red card had been rescinded, having seen himself dismissed for what was alleged to be violent conduct by match official Anthony Taylor during the FA Cup clash at Molineux.

We have good news on @LeroyFer8! 👍

He’ll now be available for Saturday’s trip to @NUFC…
https://t.co/PblnG320hi

It was decided by the FA that the referee had made an error over his decision, leaving the Dutch international free to turn out at St James’ Park for what is set to be a crunch clash between two relegation rivals.
Fer has been a regular for the Swans this season, with 21 appearances and three goals under his belt across all competitions so far, although his fine performances have been unable to help pull his club away from the drop zone.
Swansea are currently sitting bottom of the pile in England’s top flight, four points adrift of safety and six points behind Newcastle, who are sitting in 13th.
While they come into the clash off their 0-0 draw with the Championship table toppers, the Magpies saw off League Two leaders Luton Town on Saturday, Ayoze Perez netting a double on the way to a 3-1 victory.
In other Newcastle United news, the club must replace their pass master with a former Toon Army hero available for a bargain.