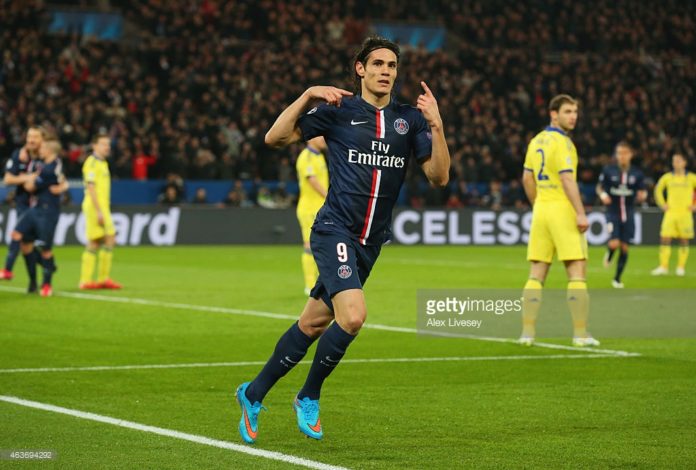 By Editor
Kicking off on Thursday night, the Copa America in Chile offers the ideal shop window for players keen to demonstrate their wares to potential buyers this summer.
South America’s showpiece event will attract scouts, agents and officials from the world’s elite clubs, hoping to discover new talent or open the bidding on an established star.
Football Insider outlines the credentials of six players who can use the Copa America to help get a move this summer.

EDINSON CAVANI (Uruguay)
Has had to get used to playing second fiddle for club and country to two of the world’s great strikers, Zlatan Ibrahimovic and Luis Suarez.
But the 28-year-old is a blue-chip spearhead in his own right, and has the goals record and price tag to prove it.
After finishing the season with a flurry of goals to leapfrog Ibrahimovic and end as Paris Saint-Germain’s top scorer with 31 goals, including 18 in Ligue 1, Cavani can further enhance his reputation with a strong showing in the Copa America.
It has been an open secret for some time that Cavani wants to quit PSG two years after his £53million move from Napoli, with Manchester United and Juventus among the clubs interested in striking a deal.
The problem is the French champions are reluctant sellers unless they can recoup most of the money they paid for him. With Zlatan Ibrahimovic pushing for a move this summer, and likely to get it, PSG will need some persuading to lose the second of their two star players.
The situation could change if Cavani can help fire Uruguay to a record 16th Copa success and prove beyond doubt that he is an elite centre-forward at the peak of his powers.
This could drive his value up, and persuade interested clubs it is worth going the extra mile to force PSG in to a summer transfer.

RADAMEL FALCAO (Colombia)
The timing of the South America showpiece could not be more ideal for a once in-demand striker to prove that he can still cut it at the highest level.
Falcao arrives in Chile on the back of a dispiriting 18 months in which he has struggled to regain his form and, most crucially, his zip following the knee injury that kept him out of the World Cup.
A forgettable season at Manchester United yielded just four goals in 29 matches and ended with the Premier League club deciding not to take up the option to extend his season-long loan into a permanent deal.
The Colombia international is not expected to return to parent club Monaco and is now looking for an employer who can come close to matching his salary expectations.
Chelsea have registered their interest in Falcao as a back-up to Diego Costa and the London club need to assess whether the 29-year-old is worth wage demands that are likely to be around the £200,000-a-week mark.
A few goals in the tournament could twist a few arms at Stamford Bridge and demonstrate that the former Atletico Madrid and Porto striker remains a player who can give defences sleepless nights.

ARTURO VIDAL (Chile)
An integral member of the Juventus midfield quartet that nearly carried all before it in the club’s best campaign for a generation, Vidal returns to his homeland for the Copa America just days after his team were beaten by Barcelona in the Champions League final.
The 28-year-old has attracted strong interest from Premier League clubs, with Manchester United manager Louis van Gaal admitting that he has tried to sign him on countless occasions.
Arsenal are also admirers of Vidal although they are aware that it would take a bid of around £35m to persuade Juve to part company with a player who has been at the heart of their run of four consecutive Serie A triumphs since his move from Bayer Leverkusen in 2011.

GONZALO HIGUAIN (Argentina)
Has the pedigree to justify a £25m price tag and the interest of a host of leading European clubs amid the growing likelihood he will switch clubs this summer.
A reliable goalscorer at club and international level, where his 48 appearances have yielded 23 goals, Higuain’s predatory instincts could be key to Argentina justifying their Copa America favourites’ tag.
He will face a battle just to make the team, with Sergio Aguero, Carlos Tevez and Javier Pastore also battling to join Lionel Messi in world football’s most competitive front line.
If Higuain can clear that hurdle, he can give Napoli even greater bargaining power should Europe’s elite come calling this summer.
With the Italian club set to appoint a new manager as they prepare for another season outside the Champions League, they are likely to listen to offers for the prolific 27-year-old.

ANGEL DI MARIA (Argentina)
What a difference a year makes. Following his stellar performances in Real Madrid’s 2014 Champions League triumph with a fine World Cup, Manchester United broke the British transfer record to land the attacking midfielder.
However, the 27-year-old’s spell at Old Trafford could turn out to be a short one. After failing to build on a storming start, his performances dipped alarmingly in the second half of the season and he ended the campaign warming the bench as he found himself overlooked in favour of Ashley Young.
United could be willing to listen to offers for Di Maria but they would look to recoup most of the £59.7m they spent on the Argentine.
PSG tried to sign Di Maria from Real last summer but their plans were scuppered when their spending power was curbed by UEFA for breaching Financial Fair Play rules.
The French club remain firm admirers of the Argentine, whose family are believed to be unsettled in Manchester and a change of scenery could appeal to the player if a deal can be struck.

CARLOS BACCA (Colombia)
A stellar Copa America will only boost the appeal of the powerful striker, whose goals helped Sevilla clinch the Europa League and earn a place in next season’s Champions League.
Aged 28, he is a bit of a late bloomer at club and international level. Has recently climbed out of Falcao’s shadow to lead the Colombia front line, with seven goals in 17 matches supplementing his one-in-two strike rate for Sevilla and former employers Atletico Junior of Colombia and Club Brugge of Belgium.
Premier League clubs have been among those alerted by Bacca’s 28 goals last season, with his 20-goal haul in La Liga bettered only by Cristiano Ronaldo (48), Messi (43), Neymar and Antoine Griezmann (both 22).