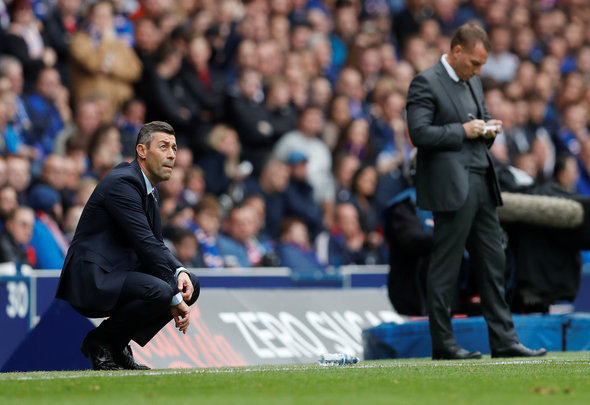 BBC Sportsound commentator Rob Maclean has brutally mocked the Rangers players for getting nowhere near Celtic captain Scott Brown in the Old Firm clash on Saturday.

Brown was arguably one of the best players on the pitch as the Hoops ran out 2-0 victors over their bitter rivals thanks to goals from Tom Rogic and Leigh Griffiths.

At half-time, Brown was involved in a moment of controversy when him and Gers boss Pedro Caixinha squared up to one another as they were about to head down the tunnel.

Caixinha took offence to the Hoops midfielder appearing to launch an elbow at Alfredo Morelos in the opening period and confronted him at the break.

Now, Maclean has joked about how the Light Blues players couldn’t even get as close to Brown as their Portuguese manager.

“Credit to Pedro Caixinha. He got closer to Scott Brown than most of his players when the Rangers manager squared up to the Celtic skipper as the half-time whistle blew at Ibrox on Saturday,” he said on the BBC Sport website.

“And, worryingly for Rangers, he didn’t have to hit anything like top gear to dominate the big-match midfield. The massively influential Brown was rarely troubled as he ran the show from start to finish and led Celtic to a comfortable 2-0 win.”

Celtic moved eight points clear of Rangers in the Premiership standings after the weekend’s results as they look to secure yet another league title.

Up next for the Light Blues is a trip to Hamilton where they would undoubtedly want to bounce back to winning ways and get their league campaign back on track.

For Celtic, they travel to Anderlecht in the Champions League group stages on Wednesday night.

In other Rangers news, there has been a crushing blow ahead of Friday’s game with three midfielders ruled out of the Hamilton tie.