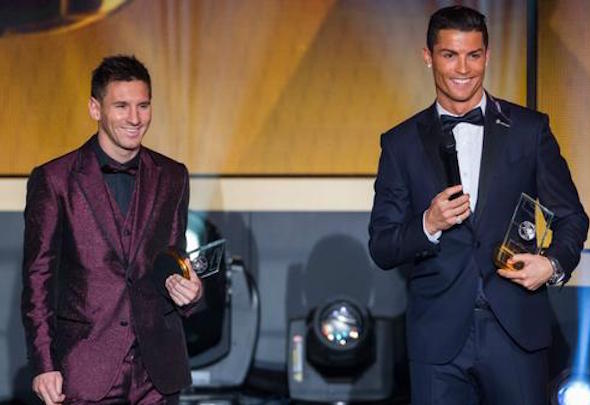 By Spain correspondent Miguel de Souza
Cristiano Ronaldo is convinced that Lionel Messi will reclaim this year’s title of the world’s best player.
Ronaldo believes he had the greatest season of his remarkable career in 2014-15 but does not expect to win the Fifa Ballon D’Or crown for a third consecutive year.
“To be honest I think Messi is going to win this year because this kind of trophy, it depends on votes,” Ronaldo told the Jonathan Ross show, to be broadcast tomorrow night. “You win competitions, you win Champions League, you win the league in terms of individual.”
Ronaldo was La Liga’s top scorer last season with 48 goals, five more than Messi’s haul of 43, while both players struck 10 times in the Champions League, which was won by the Argentine’s Barcelona team.
The Portugese said: “I did probably the best season of my career which is good and I was the highest scorer in Europe [but] it’s all about votes, it’s difficult and to be honest I’m not very worried about that because as I said many times, I never [thought I’d] win three times to be honest.”
Ronaldo has won three Ballon D’Or titles – in 2008, 2013 and 2014 – while Messi won four in a row between 2009 and 2012.