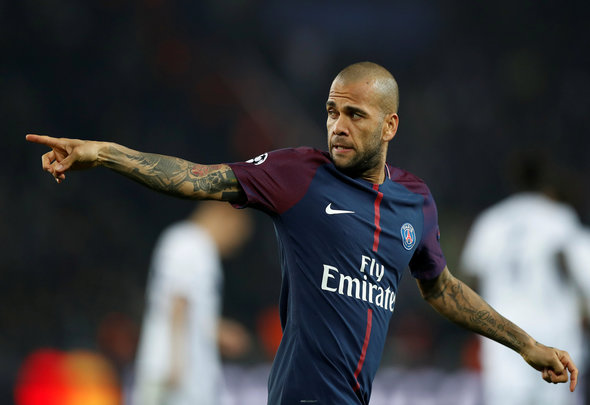 Paris Saint-German star Dani Alves has reminded Celtic that the French side will be ready to go all out in their Champions League group stage clash on Wednesday night.

PSG have already qualified for the last-16 of the competition, but Brazil international Alves has warned the Bhoys that they will not be let off lightly when they travel to the French capital.

The Parisiens hammered Celtic 5-0 at Parkhead in the opening game of the Champions League group stages back in September.

The Hoops have since seen their chances of finishing in the top two of their group disappear after defeats against Bayern Munich but can all but assure themselves of a spot in the Europa League knock-out rounds by earning a point against PSG on Wednesday.

Brendan Rodgers’ side are third in the group, three points clear of bottom placed Anderlecht with two games to go.

A draw in France, coupled with a Bayern Munich win over Anderlecht, will assure the Hoops of third place and their ticket in Europe’s second competition.

However Alves has warned that the Hoops will not be taken lightly at Parc des Princes this week if that’s the belief that they are currently under.

“There is no chance that we will take it easy on Celtic if that is what they think – the job is not finished yet,” he said, as quoted by the Daily Record.

“It is important to keep up momentum but also it is important that we win the group. There is no chance that Celtic can expect an easy game just because we have already qualified.

“The scoreline in Scotland doesn’t mean anything now – it doesn’t mean that it’s an automatic win. That would have hurt Celtic and they won’t want it to happen again.”

Alves has been a mainstay of the PSG side this season, with the former Barcelona right-back making 14 appearances across all competitions, scoring two goals and supplying five assists in the process.

In other Celtic news, Mikael Lustig has made a shock admission about how Rangers have helped the Hoops.