Pundit and former midfielder Danny Murphy has told that he has doubts whether Daniel Levy will make a habit of signing ageing players such as Fernando Llorente.

The north Londoners brought the 32-year-old in from Swansea in a surprise deadline day swoop.

It is a different sort of player to what Spurs usually go for with the club showing in recent years that they like to bring in players of potential who can also bring possible re-sale value.

However, Murphy has stated he is glad Tottenham have swayed from their usual policy and believes Llorente can be a success with Harry Kane in the attack.

“It is ridiculous to be so formulaic about transfers that you refuse to sign somebody simply because of his age, so I am relieved to see Tottenham break from their normal policy to sign Fernando Llorente from Swansea,” told Murphy to the London Evening Standard.

“I doubt Daniel Levy will make a habit of signing 32-year-old outfield players but it is a clever bit of business.

“Llorente should be excellent back-up for Harry Kane but, if Tottenham are chasing the game, they could play together.

“Spurs face a lot of defensively minded teams so Llorente will allow them to get balls into the box from wide – and there is nothing wrong with playing that way when required.”

Alongside Llorente, young full-back Serge Aurier also joined from PSG on deadline day, while each of Davinson Sanchez, Paulo Gazzaniga and Juan Foyth made the switch to north London through the summer.

Kyle Walker and Kevin Wimmer were the only two high-profile players to depart Mauricio Pochettino’s squad and fans will be confident Spurs can now repeat and even do better than last season’s second placed finish.

Tottenham’s next fixture will see them travel up to Goodison Park to face Everton on Saturday afternoon and fans will be hoping for a first look at their new signings.

In other Tottenham news, Spurs and Premier League giants will head the queue for this dazzling attacker in January. 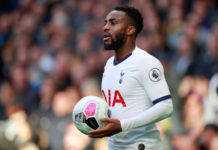