Former Celtic boss Davie Hay believes that current Hoops manager Brendan Rodgers would have tore into his players following the dismal 3-0 loss to Zenit on Thursday night.
Rodgers may have been limited in his criticism in public, but Hay thinks that in the dressing room it would have been a different story.
“Publicly there is always soft criticism and we saw that after the game, but I just wonder how brutally frank Brendan Rodgers might have been in his dressing room,” Hay said, as quoted in his Evening Times column.
“I cannot help but suspect that the time has come for a few blunt observations to be levelled at some of the players after the performance against Zenit St Petersburg on Thursday night.
“It is not that it was a one-off because we have seen these defensive frailties over and over from Celtic in Europe in recent seasons.
“And while there is a fair argument to say the resources of Zenit far outstrip Celtic’s, you cannot shy away from just how poor the club were on the night.”
Two of the players Hay may be talking about in particular are Jozo Simunovic and Dorus de Vries, both of whom were are fault by goals scored by the Russians in the game.
De Vries in particular has found himself under fire after his poor attempt at saving Daler Kuzyaev’s swerving shot.
The Hoops don’t have long to dwell on the defeat to Zenit however, as they are back in Scottish Premiership action on Sunday when they take on third placed Aberdeen at Pittodrie.
A win for the Dons would see them cut Celtic’s lead at the top of the table to six points and put the Hoops under a bit of pressure in the league for the first time in a few years.
Second placed Rangers can temporarily cut the gap at the top of the league to six points if they defeat second Hearts at Ibrox on Saturday.
In other Celtic news, Chris Sutton has slaughtered the signings made by Brendan Rodgers
Don’t miss out on breaking and exclusive Celtic news by clicking here for our brilliant 24/7 updates on Facebook, Instagram and YouTube. 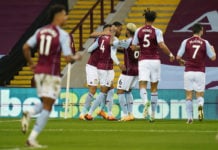