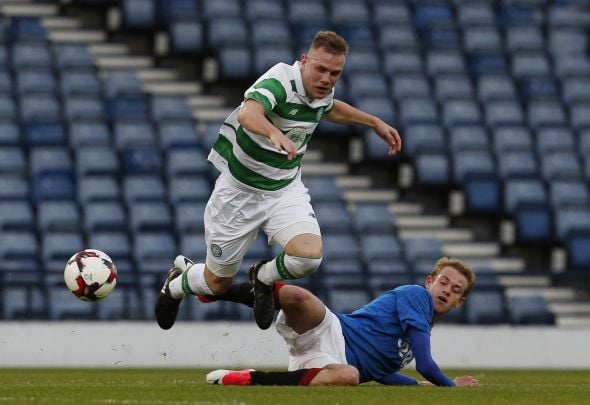 Celtic midfielder Mark Hill is on the verge of signing on loan for St Mirren within the next 24 hours, according to a report.
The Scottish Sun are claiming that the 19-year-old is set to join the Championship leaders on-loan until the end of the season, where he will team with Lewis Morgan, who will join the Hoops next season.
Hill, who can play in defence as well as midfield, was signed by the Hoops in 2012 from Hamilton. He signed a three-year-deal last May and is highly-rated by manager Brendan Rodgers.
Whilst he is yet to make his competitive first-team debut, he did play in the pre-season friendly against Lyon and has often featured in the UEFA Youth League.
Football Insider verdict
This move seems like a good one for both clubs and the player involved. St Mirren will be getting an extra player in as they aim to clinch promotion to the Scottish Premiership, Brendan Rodgers will get reports on if the player has the ability to make the grade in a competitive league, and Hill himself will presumably get some valuable playing time. The player still has time to run on his contract so he is still well-thought of by Celtic, perhaps if Hill is instrumental in helping St Mirren win the league the loan-deal could be extended, which once again could be a good move for all parties involved.
In other Celtic news, the Hoops must try and make a permanent deal for Charly Musonda
We’ve launched a << BREAKING NEWS FEED>> exclusively for your club. ‘Like Us’ on Facebook by clicking here if you want 24/7 updates on all Celtic breaking news.