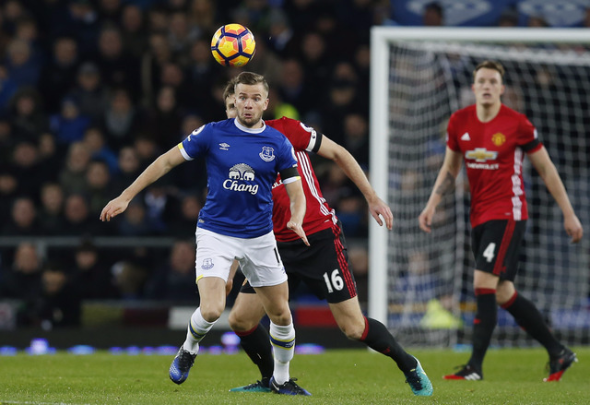 Tom Cleverley is close to sealing a permanent transfer from Everton to fellow Premier League club Watford, according to a report.

The Watford Observer claim the 13-times England international is one match away from triggering an appearance clause in the loan contract that took him to Vicarage Road in the January transfer window.

It is said that Cleverley’s transfer to Watford “will automatically be made permanent” if he makes nine appearances before the end of the campaign.

Given that the central midfielder made his eighth appearance for the Hornets in their 1-0 defeat to Crystal Palace on Saturday, and has started each of the team’s last seven matches, it appears that the move could be sealed at the start of next month.

Watford are next in action on 1 April when they host relegation-threatened Sunderland in the Premier League at Vicarage Road.

Cleverley has been a mainstay of Walter Mazzarri’s side since his winter window switch after slipping down the pecking order at Everton under Ronald Koeman.

The 27-year-old, who joined Everton on a free transfer in the summer of 2015, has three years to run on his contract at the Merseysiders but appears to have played the last of his 42 matches for the club.

Cleverley’s time at Everton looks up and this reported clause will serve to finalise the process. There is no intelligence on what fee Watford will be required to pay, but it should be a healthy one given his age and the three years left on his Toffees contract. It could be a good deal for all three parties. Cleverley has found his level at Watford, where he can expect to be a regular, but Everton have superior alternatives, especially following the January signing of Morgan Schneiderlin and the stunning emergence of Tom Davies.