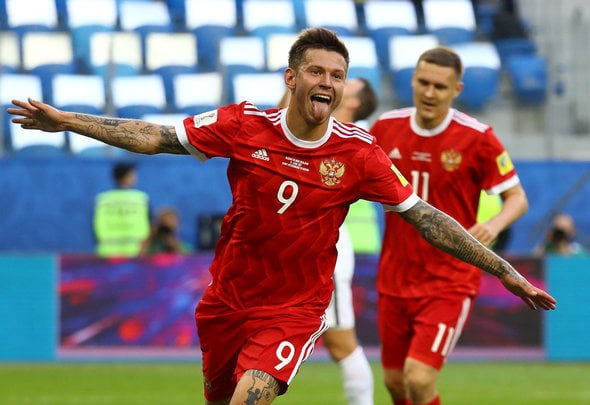 West Ham United will not be signing Russian international striker Fedor Smolov this transfer window, according to a report.
Football.London revealed that the Hammers bid for the Krasnodar forward had been unsuccessful and neither the club nor the player were tempted by the Premier League side’s offer.
The Irons are in need of options up front and find themselves down to the bare bones with injuries to key players.
Andy Carroll, Manuel Lanzini, and now Pedro Obiang are all injured as the list of players sidelined continues to grow.
And it looked as though in the Russian international, they had a player who was sure to fire in the goals, after notching up 48 in 64 for Krasnodar.
However, the report reveals that the Hammers failed to meet the valuation of the player which had been dropped from £15million to £12m in order to push a move through – but according to the player himself:
“There was no offers that would be acceptable for the club and me.
“I will stay and play for Krasnodar and prepare well for the World Cup and in the summer I will wait for offers that Krasnodar will suit and will meet my goals.”
It now looks as though the Irons will turn their attention to luring Preston North End forward Jordan Hugill to the London Stadium who is according to the Daily Mail transfer blog (Wednesday, 14:09), available for a fee of between £9m and £11m.
Football Insider verdict:
News that the club were unable to meet a £12m fee in the current climate will undoubtedly make supporters of the Hammers irate. This would have been a fantastic coup for the club if the Russian could have gotten close to the goalscoring record he has in Russia. A deal for a proven striker internationally and domestically has been allowed to fall by the wayside and you have to question the club’s ambitions. Now that the east Londoners are being linked with Hugill in the Championship for a fee similar to what they could have paid Krasnodar, it smacks of indecision and lack of direction.
In other West Ham transfer news, Hammers make last-minute hijack attempt on PL rivals for hotshot.